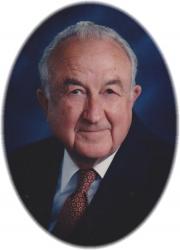 Dr. Lloyd Sharp Allen - 92 years, of Wolfville and Sydney, passed away in the Valley Regional Hospital on Saturday, August 8, 2015. Born on June 6, 1923, in Summerside, Prince Edward Island, Lloyd was the only son of Harry S. and Kathleen (Hinton) Allen. He was predeceased by his wife, Virginia May (Eidt) Allen and a sister, Dorothy (Allen) Profitt. Lloyd studied his pre-med at Mount Allison University (1941-43) and received his MD from Dalhousie University in 1948. Lloyd met and married the "love of his life" at the Saint John General Hospital and together, he and Virginia had very close to 65 devoted years together. Lloyd practiced medicine in Hatfield Point, NB before moving on to take post graduate studies in general surgery at McGill University and the Royal Victoria Hospital. He received his MSc and FRCS (C) in 1954. Lloyd and Virginia moved to Cape Breton. Lloyd initially practiced surgery in New Waterford for a year and then spent the majority of his career in Sydney from 1955-97. Respected by his peers, loved by his patients and honored by his colleagues, Lloyd was described as a doctor "who has the ability to keep the good of his patients in mind". Lloyd and Virginia raised four sons in Cape Breton and then moved to Wolfville in 1997, leaving their home on the Mira River, where so many happy times had been spent with family and friends. Lloyd hated to leave his garden but on moving to the "Valley", was quick to start a new plot and has been busy passing on his talent. Lloyd is survived by his sons, Doug (Leslie Dixon), Halifax; Jamie (Judy), Berwick; David (Ronda), Bedford; Paul (Gina), Truro; sister, Kathleen Oakley; nine special grandchildren, Heather (Geordan Moore), Christopher, Jacqueline (Sheldon States), James (Sarah Mullen), Kathleen, Robert, Holly, Brandon and Amelia; a great granddaughter, Naya States. Cremation has taken place. There will be no visitation, by request. The funeral service, followed by a reception, will be held at 11:00 a.m. Saturday, August 15, 2015 in the White Family Funeral Home, Kentville, Reverend Beth Johnston officiating. Burial will take place at a later date in the Willow Bank Cemetery, Wolfville. Donations in memory may be made to the Cape Breton Regional Hospital, the Valley Regional Hospital or the charity of your choice. Arrangements have been entrusted to the White Family Funeral Home and Cremation Services, Kentville.