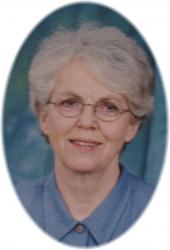 Janet M. Townsend - 80, of Wolfville, died on Tuesday, September 22, 2015 in the Valley Regional Hospital, Kentville. Born in Berwick on January 24, 1935, she was the daughter of the late Winnifred (Sullivan) and Norman Clark. She was the valedictorian of her graduating class from Central Kings and went on to graduate with a Bachelor of Arts from Acadia University. She was Queen Annapolisa 24th in 1956. She married William Townsend (deceased 2004) and was the dedicated (and busy) mother to their 10 children. She had a love of music and was the choir director at St. Andrews United Church for many years. She was a true animal lover and always had cats and dogs at her side. Her home was always a warm and welcoming spot for her children, grandchildren, friends and family. After being diagnosed with leukemia in February she was very happy that all of her children were able to come home to visit and spend time with her. She is survived by her children, Michael (Heather Hill), Wolfville; Catherine (Chris Fuller), White Rock; John (Casey), Greenville, South Carolina; Elizabeth (Brian Misner), Grande Prairie, Alberta; Mary (David Martell), Lunenburg; David (Miki), Okayama, Japan; Paul (Sachiko), Okayama, Japan; Margaret (Stephen Schneider), Wolfville; Amy (Michael Sutton), Wembeley, Alberta and Mark, Vancouver, British Columbia; her grandchildren, Alexandra, John William and Trevor Townsend, Emily, Bradley and Gillian Fuller, Morgan and Eloise Townsend, Mitchell, Denise and Jennifer Misner, Willa Martell, Ken Townsend, Koji and Alisa Townsend, Evangeline Schneider. She is also survived by her brothers, Robert Clark (Ruth), Berwick and Ralph Clark, Berwick; brother-in-law, Trevor Townsend (Pam), Dartmouth as well as several nieces and nephews. She was predeceased by her loving husband, Bill and her grandson, Evan Fuller. Cremation has taken place. There will be a Service of Remembrance, followed by a reception, on Monday, September 28, 2015 at 11:00 at the White Family Funeral Home, Kentville, Reverend Robin Brown-Hewitt officiating. Private family interment in Willow Bank Cemetery to follow. In lieu of flowers, donations in Janet's memory may be made to the Valley Regional Hospital Foundation or the Leukemia and Lymphoma Society of Canada. Funeral arrangements have been entrusted to the White Family Funeral Home and Cremation Services, Kentville.