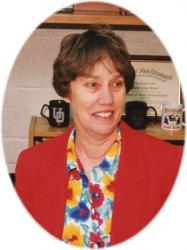 Sharon was born in Ottawa, the daughter of Dr. George M. Furnival and Marion (Fraser) Furnival. She spent most of her childhood in western Canada and attended the University of British Columbia, graduating with a B.Sc. degree with Honours in Chemistry and a major in Mathematics. She did graduate work at McGill University, graduating with a Ph.D. in Physical Chemistry. While at McGill, she married her husband of 47 years, John Roscoe. Sharon spent her entire professional career teaching Chemistry in the Food Science and Chemistry Departments at Acadia University. Over her career, she taught virtually every Chemistry course in these departments, spanning the unusually broad range of topics from Biochemistry to Theoretical Chemistry. She rose rapidly to the rank of Professor and served the University as Head of the Chemistry Department and for a short time as Acting Head of Food Science, as well as serving on a large number of University committees. She also held positions as Adjunct Professor in the School of Biomedical Engineering at Dalhousie University and in the Department of Chemistry at the University of Guelph and co-supervised graduate students in the School of Engineering at McGill University. On her retirement, the University appointed her Emeritus Professor. Sharon had an extremely productive research career. Her work was funded continuously throughout her career by the Natural Sciences and Engineering Research Council of Canada (NSERC) as well as through contracts with the Dairy Farmers of Canada, the Nova Scotia Health Research Foundation, SOHIO and BP America. She served as co-chair of the NSERC Biosciences B Strategic Grants Committee for two years and as a member of the NSERC Discovery Grants Committee for Physical and Analytical Chemistry. Her accomplishments were recognized by the Chemical Institute of Canada when she was elected a Fellow of the Institute and by the Canadian Society for Chemistry by presentation of the Clara Benson Award. She served on the executive of the Canadian Section of the Electrochemical Society, including a term as Chair, and was presented with the society’s R. C. Jacobsen Award in recognition of her work. She served in a number of roles with the International Society of Electrochemistry, culminating with her election to three consecutive 3-year terms as Secretary General of the society. She also served on the organizing committees of 12 international conferences for the society. She was appointed an Honorary Member of the society in recognition of her service to the organization. Sharon had a longstanding interest in figure skating and riding. She served as coach for the Wolfville Figure Skating Club, including a term as its president. She also served as an instructor for the Annapolis Valley Pony Club and as a Beaver Leader for the Wolfville Scout Organization. She enjoyed camping, canoeing and skiing with her family and in retirement was an avid golfer. She is survived by her husband, John; two sons, James and Thomas; two grandchildren, Coll and Ailsa; a sister, Patricia; and two brothers, William and Bruce. A memorial service and reception will be held at 2:00 p.m. Monday, December 14, 2015 in the Manning Memorial Chapel, Acadia University, Wolfville, Reverend Tim McFarland officiating. Interment will be in Lakeview Cemetery, Lakeville, Kings County. Donations may be made to the Valley Regional Hospital or to the charity of one’s choice. Funeral arrangements have been entrusted to the White Family Funeral Home and Cremation Services, Kentville. On-line condolences and inquiries may be directed to www.whitefamilyfuneralhome.com.