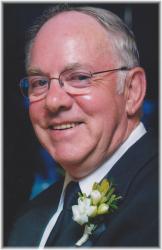 Frank Densley Spriggs - It is with great sadness that our family announces his passing on December 15, 2015 at home with his loving wife, Emily and family at his side. Frank was 75 years old. Born in Halifax on June 23, 1940, Frank was the son of the late Frank Alvin Spriggs and Leona "Ruth" (Nicholson). After graduating from the Dalhousie School of Pharmacy in 1964 Frank began his Pharmacy career at Lorne Pharmacy in Halifax following which he worked with Tamblin's (K-Mart) in Dartmouth and then in Mississauga, Ontario. Moving home to Nova Scotia in 1970, he continued his career at Balcom Chittick Pharmacy in Windsor, NS. When the opportunity arose in 1973, Frank moved to Hantsport purchasing the then Zinck Pharmacy which became Hantsport Pharmacy Limited. Frank owned and operated Hantsport Pharmacy serving that community for 11 years. In 1984 Frank and his family relocated to New Minas where he continued his career with Cochrane's Pharmacy in Wolfville and Canning as well as the EKM Hospital in Wolfville. Frank's final career move was to Lawton's Drugs in New Minas from where he retired after 19 years of caring for this community. Throughout his career he was particularly dedicated to seniors and the terminally ill, feeling strongly that all clients he served should be treated with kindness, respect, understanding and compassion and expected nothing less from his co-workers. Following his retirement, Frank enjoyed spending the good Maritime weather on the golf course as a member of the Ken-Wo Golf and Country Club in New Minas. During the winter months he was a member of the Glooscap Curling Club in Kentville. He enjoyed the friendships, comradery and good sport that recreation brought to him. Gardening and local travel with wife, Emily brought great enjoyment. Photography became a hobby for which Frank had great passion. Visits with his grandchildren were especially treasured. His pride for his family was immense. Leaving to mourn with cherished memories are his devoted wife of 52 years, Emily (Jackson); daughter, Pam (Paul) Sanford, Halifax; son, Randy, Windsor; daughter, Brenda, Wolfville; daughter, Nancy (Todd) Horn, Middle Sackville; son, Roger (Tanya), Lucasville; his grandchildren, Alison and Mei Yin Sanford, Amber, Jaimie, Douglas and Kirbie Spriggs, Tory, Daina, Julia, Talia, Alix, Owen and Ethan Horn and Ryder Spriggs. He also leaves his sister, Deborah (Carl) Beairsto, Mineville; brother, Richard (Colleen), Dartmouth; many nieces and nephews; sisters-in-law, Bertha "Dolly" Spriggs, Dartmouth and Jeanette Spriggs, Oromocto, NB. In addition to his parents, he was predeceased by brothers, Charles, (Dartmouth); James, (Oromocto); sister, Elizabeth (Keith) Keating, (Iles de la Madeleine); nephew, Kelly Spriggs, (Oromocto). Many thanks for their care and support are extended to Frank's palliative care team of Dr. Lori Burgess, Dr. Karen Burch and Paulette Gash. Also many thanks to Dr. Julia Merryweather and the many nurses and volunteers in the Chemotherapy Lab at Valley Regional Hospital. We also extend thanks to the numerous nurses and home support workers at the Annapolis Valley VON. Cremation has taken place. Visitation will be held from 6-8 p.m. Friday, December 18, 2015 in the White Family Funeral Home, Kentville, where the funeral service, followed by a reception , will be held at 1:00 p.m. Saturday, December 19, 2015, Reverend Beth Johnston officiating. Burial will take place in the Gaspereau Cemetery, Kings County. Donations in memory may be made to the Canadian Cancer Society or the Valley Regional Hospital. Funeral arrangements have been entrusted to the White Family Funeral Home and Cremation Services, Kentville.