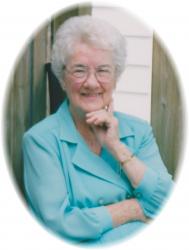 Della Margaret Loughead – The family of Della Margaret Loughead, age 97, is saddened to announce her passing on Sunday, March 20, 2016 in the Halifax Infirmary, QE II, Health Sciences Center. She was born on September 22, 1918 in Truro. She was the daughter of the late John and Myrtle (Hirtle) Teed. She was predeceased by her husband, Rufus Loughead; four brothers, Murray (Evelyn), Walter (Dorothy), Gordon, Jim, special niece, Margaret Urquhart and an infant son and daughter. Della is survived by two sons, Gary (Louise) Loughead, Windsor Junction; John (Pam) Loughead, Cambridge; three grandchildren, Brian, Ottawa; Cathleen, Middle Sackville and Ian (Elizabeth), Beechville; niece, Barb Dunlop, New Brunswick; two step-grandchildren, Chris (Jodi) White, Kentville and David (Kate) White, Coldbrook. Della was the last surviving member of her family. She was a member of the former United Church of St. Paul and St. Stephen, Kentville. She enjoyed knitting, quilting, gardening and watching the Blue Jays, both at her feeder and on TV. During the past years, Della resided in Coldbrook, Fundy Villa, Berwick and finally at Northwood Manor, Halifax. The family would like to thank the staff at Fundy Villa, Northwood Manor and 8.1 Unit of the Halifax Infirmary for the wonderful care given to Della. There will be no visitation by request. The funeral service, followed by a reception will be held at 11:00 a.m. Saturday, March 26, 2016 in the White Family Funeral Home, Kentville, Reverend Doctor Judith Saunders officiating. There will be a private family burial at a later date in the Old Barns Cemetery, Colchester County. In lieu of flowers, donations in memory may be made to the Fundy Inter Church Food Bank or a charity of your choice. Funeral arrangements have been entrusted to the White Family Funeral Home and Cremation Services, Kentville. On-line condolences and inquiries may be directed to www.whitefamilyfuneralhome.com.

Condolences left here will be kept private and forwarded to family members.
They will not be available for public viewing.
Service Date
Saturday, March 26, 2016
Service Time
11:00 a.m.
Service Location
White Family Funeral Home, Kentville, NS
Visitation Location
There will be no visitation, by request
Burial Location
Old Barns Cemetery - Later Date
Requested Charity
In lieu of flowers, donations in memory may be made to the Fundy Inter Church Food Bank