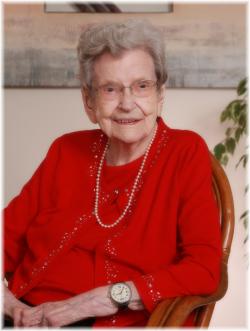 Elizabeth Murdoch passes away at the age of 100

MURDOCH (McKnight), Elizabeth MacLean, 100, of Centreville, NS passed away peacefully on Tuesday, June 14, 2016 in the company of family at the Windsor Elms Village in Falmouth, NS. Elizabeth, the eldest of four children, was born in Amherst, NS on November 24, 1915. Her mother was Mabel McKnight and her father was James Alfred MacKnight. She had three brothers: James, Samuel and Fred. Elizabeth married Robert Harrison Murdoch in August 1941.

Elizabeth’s father died when she was six years old. The family moved to Lower Napan in 1922 to the ancestral family farm. It is there she grew up, went to school and met her future husband. She was a teacher in many one-room country schools in New Brunswick, teaching as well in other provinces. Because her husband was a pilot, she travelled and lived in various parts of Canada, and visited other countries in Europe, South America, Asia, and New Zealand.

Elizabeth gave birth to two boys: Leigh and Lorne. The Murdochs ended up retiring in Centreville, NS in 1982. Elizabeth loved the Annapolis Valley. She was a fervent supporter of the Canard United Church, participating in many church activities such as baking, quilt making, knitting baby booties and hats for newborns. One of Elizabeth’s fondest memories is that of cutting pies with Georgina Eaton at their church suppers and Sunday lunches after church with Evelyn, Margaret Chase and daughter, Peggy. She was treasurer of her UCW and was granted a UCW life membership. Elizabeth was an avid gardener and maker of preserves. Her strawberry, raspberry and blueberry patches were always a main attraction when visitors came. She was a CBC news aficionado, a die-hard Expo fan and a consummate lover of crossword puzzles and lexicons.

Elizabeth is pre-deceased by her two brothers, James and Fred as well as her husband, Robert, who passed away in March 1989. She leaves behind two sons: Leigh, and his wife Blanca, who live in Canning; and Lorne, and his wife Marianne, who live in Austria. She is a grandmother to Sandra, Stephanie, Jerome, Genevieve, Brigitte and Tiffany.

The funeral service will be held at 2:00 p.m. on Tuesday, June 21, 2016 in the chapel at the White Family Funeral Home in Kentville, NS. Reverend Ivan Norton will be officiating. A reception will follow the service and all are welcome to come and reminisce with the family. Burial will be taking place at the Black River Community Cemetery in Black River Bridge, NB. Reverend David Cleveland will conduct the graveside service.

In lieu of flowers, donations may be made to the Orchard Valley United Church, CNIB or a charity of one’s choice. Funeral arrangements have been entrusted to the White Family Funeral Home and Cremation Services, Kentville. On-line inquiries and condolences may be directed to www.whitefamilyfuneralhome.com