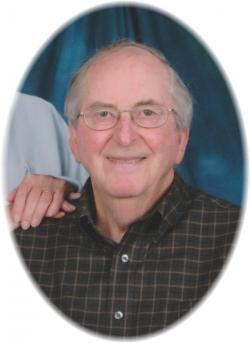 George Frederick Forsyth, BSc, BA, BEd, MEd, PhD – 85, of Greenwich, Kings County, passed away at home on Saturday, July 23, 2016. Born in Wolfville, he was a son of the late Frederick and Jennie (Bishop) Forsyth. George graduated from Acadia University with a BSc in 1951, and a BA in 1952.  He accepted a position as a teacher, commencing his career at Bishop’s College School in Lennoxville, Quebec.  In 1954 he began teaching at Horton Academy.  While house master at Horton he met and married Gi Corcoran who was teaching at Acadia and they shared a life together of sixty years. The year following their marriage he graduated from Acadia University with a BEd in 1957.  Together they moved to New Brunswick where he was principal at Summerhill Street Elementary School in Oromocto, New Brunswick and while in this position, graduated from University of New Brunswick with a MEd in 1963. Together, with now three children, their centennial project was to return to Nova Scotia where he was supervisor of Cornwallis District Schools and later with the Kings County Amalgamated School Board, and it was during this time that he graduated from Dalhousie University with a PhD in Education in 1984. After retiring from the school system, George continued employment as a sales representative with Ginn and Company Education Publishers.  He was an early advocate of multi-age classrooms and was named to the International Who’s Who of Education.  In the community, George was active holding offices as President of the Nova Scotia Branch of VON and Vice President of the National Board of VON.  George was an Elder of the Greenwich United Church and a member of Phi Delta Kappa. As an artist, George was a talented silversmith, rock cutter, potter and painter, having studied painting with Helen Beals and Jeannie Edmonds Hancock.  His paintings of water and shorelines are in many private collections and were a highlight of Ducks Unlimited auctions for many years.  He was also an accomplished chef, enjoyed good food, and there were never enough desserts.  Golfing for seventy-eight years provided much enjoyment for him.  Having achieved a six handicap, and KenWo club champion he finally scored a hole-in-one. He is survived by his wife, Alice Elgiva "Gi" (Corcoran); a daughter, Celia (Pat) Melanson, Shelburne; two sons, George "Geordie" (Cindy), Port Williams; Fred, Upper LaHave; a brother, Brad Forsyth, Berwick; 10 grandchildren, George "GW", Mary, John (Keshia), Ann and Emma Forsyth; Arthur and Eleanor Melanson; James, Samantha and Abby Forsyth; close family friend, Jean Marsh, Wolfville; a large extended family.  He was predeceased by a daughter-in-law, Darlene; a sister and brother-in-law, Jessie and Rex Martin; a half-brother, Gordon Shaw; a sister-in-law, Joy Forsyth;. Cremation has taken place. Visitation will be held from 6:30-8:30 p.m. Wednesday, July 27, 2016 in the White Family Funeral Home, Kentville, where the funeral service, followed by a reception, will be held at 2:00 p.m. Thursday, July 28, 2016, Reverend Ivan Norton officiating. Burial will take place in the Starrs Point Cemetery, Kings County. Donations in memory may be made to the Valley Regional Hospital Foundation or the Annapolis Valley Victorian Order of Nurses. Funeral arrangements have been entrusted to the White Family Funeral Home and Cremation Services, Kentville.