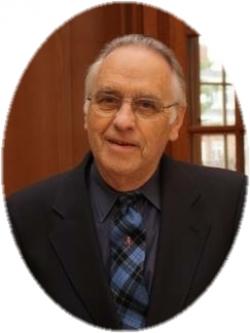 Rev. Dr. Andrew Donald MacRae – 83, of Wolfville, passed away Sunday, October 30, 2016 in the Valley Regional Hospital, Kentville. Born in Lasswade, Scotland, he was a son of the late James and Harriet (Munro) MacRae.

Born into a Christian home he was nurtured in Charlotte Baptist Chapel, Edinburgh where he led the youth ministry for some years. He received his MA and BD degrees from Edinburgh University and also graduated from the Baptist Theological College of Scotland in Glasgow. During his time in Canada, Andrew earned his PhD from Saint Andrews University in 1984. He also received a Doctor of Divinity (honoris causa) from the Campbellsville University, Kentucky, in 1979 and a Doctor of Divinity (honoris causa) from Acadia in 2004.

Ordained in 1957 Andrew led an urban ministry in the industrial community of Larbert, moving in 1960 to an inner city ministry at Ward Road, Dundee. In 1966 Andrew was appointed General Secretary and Superintendent of the Baptist Union of Scotland, providing Denominational leadership and pastoral care to pastors and churches.

Andrew was an accomplished scholar, pastor and teacher.  He served extensively in Europe and the Soviet Bloc, working with the Baptist World Alliance and also preaching, teaching and leading conferences in more than 50 countries on every continent. He served as President of the European Baptist Federation, Chairman of the Committee on Evangelism and Education for Europe, and also of the Commission on Christian Teaching and Training in the Baptist World Alliance. His leadership led to the introduction of the Evangelism and Education Division of the Baptist World Alliance. He also served as Chairman of the Theological Assistance Group, which assisted in the formation and faculty development of new Seminaries in Eastern Europe. From 1973-80 he also served as Chairman of the Committee on Mission, Development and Unity of the Scottish Churches Council.

Andrew was also a broadcaster and religious advisor, first to BBC Scotland and then for 12 years to Scottish Television. He has written many articles and several books.

The MacRaes moved to Canada in 1980 when Andrew began his service at Acadia Divinity College, establishing the first Chair of Evangelism and Mission in Canada and in 1983 he became the first occupant of the Sheldon and Marjorie Fountain Chair of Evangelism and Mission. In 1985 he added the tasks of Principal of the College and Acadia University Dean of Theology. After retiring from those positions in 1998, he continued to serve as Professor–Emeritus of Evangelism and Mission, directed the Doctor of Ministry program (a program he introduced in the 1980s) and, until 2014, served as Senior Consultant to the Doctor of Ministry Program, as a Life and Ministry Coach, and as Liaison to Hong Kong Ministries.

Following retirement Andrew and Jean were involved in pastoral ministry at Grace Chapel, Halifax from 1999-2003.

In honour of his valuable leadership and lifelong commitment to evangelism and mission, The Andrew D. MacRae Centre for Christian Faith and Culture was established at the Acadia Divinity College in February 2016.

Despite his many accomplishments Andrew will be remembered as a deeply caring and humble Christian man with a great sense of humor who touched many lives positively, and as a kind, loving and encouraging brother, uncle, husband, father and grandfather.

In addition to his parents, he was predeceased by two brothers, Jack and Ian; four sisters-in-law, Gwen, Frances, Margot and Cath MacRae; a niece, Catriona MacRae, and a nephew, Roderick MacRae.

The MacRae family thanks Valley Regional Hospital Doctors, Nurses, CCAs and staff, VON and Careforce staff for their excellent care, and Rev Dr Barry Morrison for his pastoral care.

Cremation has taken place. There will be no visitation, by request. A private burial will take place in the Willow Bank Cemetery, Wolfville. The funeral service, followed by a reception, will be held at 2 pm Monday, November 7 in the Wolfville Baptist Church, Rev Dr Barry Morrison officiating. Donations in memory may be made to the Wolfville Baptist Church, Acadia Divinity College - Andrew D. MacRae Centre for Christian Faith and Culture, the Alzheimer Society of Nova Scotia or the Lung Association of Nova Scotia.