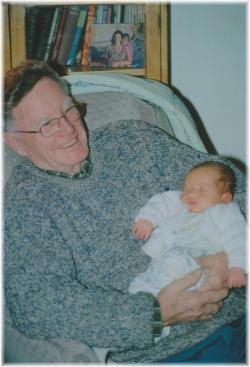 Murdy Daniel Conlin – 86, of Berwick, passed away Monday, March 20, 2017 in Grand View Manor, Berwick. Born on February 19, 1931 in New Liskeard, ON, he was a son of the late George and Bertha (Kennedy) Conlin. He is survived by his wife, Mary Louise (Schaffner), Berwick; a daughter, Christy Ann Conlin (Andrew Brown), Greenwich; two sons, Dan (Patricia Acheson), Halifax; Peter (Kirsten Forkert), Birmingham, England; two sisters, Marlene, Michigan, USA; Angela, Hamilton, Ontario; a brother, Walter (Eleanor), Ontario; three grandchildren, Silas, Angus and Milo and sisters-in-law, Janet Leigh Schaffner and Margaret Ann Thornton. He was predeceased by a sister, Lois; a brother, Eldred Joseph "EJ". Murdy grew up in Northern Ontario beside the family coal business in New Liskeard. He joined the Royal Canadian Air Force in 1956. He served overseas with NATO as ground crew for Sabre jet fighters, followed by postings at North Bay and Trenton. A promotion to corporal and air frame technician took him to Greenwood to work on the Argus fleet. Murdy invented and patented a windshield wiper system for the Argus and began exploring other possible inventions, a lifelong passion. He received a commendation in 1965 when he detected a major airframe fault that grounded Canada’s entire Argus fleet. He received his pilot’s license in 1961. It was at a dance at the Greenwood flying club that he met local Berwick girl Mary Louise Schaffner and they married in 1963. After being posted back in Ontario, Murdy left the air force in 1969. The family moved back to Nova Scotia in 1974, buying a small farm in Welsford. Murdy worked as a mechanic but continued his interests in Bay of Fundy rockhounding, photography, and inventions. He founded Fundy Energy Systems in 1976, part of the trend in exploring wind and solar power during the energy crisis of the 1970s. Murdy retired from Cobi foods in 1990. He continued renovation projects on the farm and experiments with solar energy, astronomy and photography. His grandchild, Silas Eammon Daniel was born in 2005. Murdy loved to take him for rides in the wheelbarrow or on the lawn tractor. Cremation has taken place. There will be no visitation, by request. The funeral service, followed by a reception, will be held at 11:00 a.m. Friday, March 24, 2017 in St. Joseph’s Roman Catholic Church, 48 Belcher St., Kentville, Father Craig Cameron officiating. Burial will take place at a later date in the Berwick Cemetery. Donations in memory may be made to The Winslow Unit, Grand View Manor, 110 Commercial St., Berwick, NS B0P 1E0. Arrangements have been entrusted to the White Family Funeral Home and Cremation Services, Kentville.