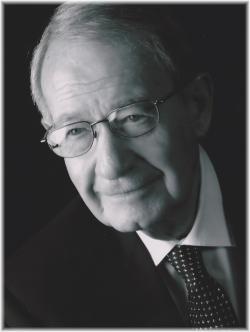 Carl Keith Miller – 90, of Kentville, Nova Scotia, died on Friday, June 2, 2017 in the Valley Regional Hospital, Kentville. Born in Lunenburg, he was the eldest son of the late George and Clara (Slauenwhite) Miller. He was predeceased by a sister, Peggy Forest, Montreal and is survived by a brother, Gordon, Bridgewater.

Following graduation from Lunenburg Academy, he obtained his BEA Diploma in Primary Accounting at Maritime Business College, Halifax, where he was invited to teach but joined the firm of H.R. Doane and Company (Grant Thornton) in 1946 and obtained his Chartered Accountant Degree in 1951. He was admitted to partnership in H.R. Doane and Company in 1955. After serving the firm at Halifax, Truro, Sydney and Newfoundland he was transferred to Kentville in 1957, where he chose to spend his entire career as manager of the Kentville office.

He assisted in setting up the accounting program at Acadia University in 1958 and lectured in accounting at Acadia for six years. Carl was an active member of the Canadian Tax Foundation. He was awarded his FCA in 1987.

Carl was a member of the United Church of St. Paul and St. Stephen, where he served as an elder and on various committees. Upon retirement he volunteered for five years as Chairman of the Financial Support Committee for the Maritime Conference of the United Church. He was a member of the Rotary Club of Kentville for 61 years, where he served as President and on various committees. He was awarded a Paul Harris Fellowship and was recognized as the second longest serving member of the club having joined in 1956.

He was a member of Kentville Masonic Lodge AF and AM No. 58, the Scottish Rite and the Philae Temple Shriners. He was a member of the Glooscap Curling Club, KenWo Golf Club and the Maritime Senior Golf Association, where he was proud to have made a hole in one on his last trip to Digby Pines at the age of 83.

Upon retirement he and Mildred travelled, enjoying many cruises and land tours to various places. The family cottage at Aylesford Lake was the scene of many gatherings. They never missed their week or two at Dalvay, PEI for many years.

Visitation will be held from 6-8 p.m. Wednesday, June 7, 2017 with a Masonic Lodge service to be held at 6:00 p.m. in the White Family Funeral Home, Kentville, where the funeral service, followed by a reception will be held at 11:00 a.m. Thursday, June 8, 2017, Reverend Ivan Norton officiating. Burial will take place in the Elm Grove Cemetery, Steam Mill, Kings County.

The family wish to thank Dr. Nunn and homecare support, Lynn, Doris and Charlie for making it possible for Carl to enjoy his home and family for the past few years and to the staff of Medical B of Valley Regional Hospital for the exceptional care over the past few months. If desired, donations in memory may be made to the Rotary Club of Kings County Charitable Foundation or to a charity of your choice.

Funeral arrangements have been entrusted to the White Family Funeral Home and Cremation Services, Kentville. On-line condolences and inquiries may be directed to www.whitefamilyfuneralhome.com.