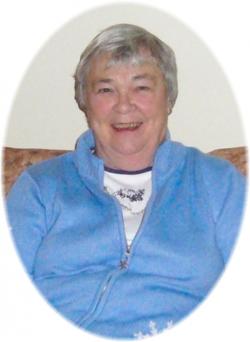 Born on October 19, 1934 in Liverpool NS, she was a daughter of the late John Atwood and Emma (Tupper) Dexter. In her early years, she worked at the community general store, and post office in Brooklyn, but is best remembered as an AVON representative in the Greenwich, White Rock and Gaspereau Valley for over 40 years.  There, she was most often in the Presidents Club, won many awards, and was one of the top selling agents in Canada on many occasions. Thank you to the people who supported her as an entrepreneur in those years – in addition to being her customers, you were also her link to the outside world and she very much thought of you as extended family.

When she wasn’t at work or in the kitchen, Mom could often be found either at her piano, or in her favorite place, her garden. Here, she spent many hours weeding, thinning and replanting the tiniest of seedlings to turn them into beautiful displays of color that were enjoyed by many.

Visitation will be held from 6-8 pm Tuesday, July 25, 2017 in the White Family Funeral Home, Kentville NS where the funeral service, followed by a reception, will be held at 10:00 a.m. Wednesday, July 26, 2017, Doctor Bob Wilson officiating. Burial will follow at 7:30 p.m. in the Scotts Bay Cemetery. Donations in memory may be made to the Alzheimer Society, the Children's Wish Foundation, or the Valley Hospice Foundation.

The family wishes to thank the nurses and doctors at the Valley Regional Hospital for your kind, compassionate treatment and care for our Mom. You are truly a special group of people.