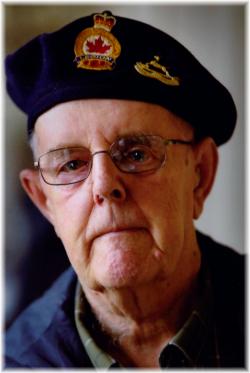 Robie Malcolm Hancock – 95, of White Rock, Kings County, passed away on Saturday, February 10, 2018 in the Camp Hill Veteran’s Memorial Building, Halifax. Born in White Rock, he was a son of the late John Wesley and Mildred (Leary) Hancock. Before enlisting at an early age, Robie worked at his father’s mill, the Pick and Hancock Mill in White Rock. Robie received his basic training in Yarmouth and advanced training in Dundurn, Saskatchewan. He left for overseas at the age of 19, where he fought with the Royal Canadian Dragoons in the Armour Corps from 1942-46, serving in Sicily, Italy, Belgium, Holland and Germany and was wounded twice, once in Sicily and again in Italy. Upon returning home, he went into carpentry, working for various people including White Rock Woodworkers, his brother, Harold Hancock and the Department of National Defence, retiring in 1985 to enjoy camping, spending time with his family and his second wife, Nellie. He also enjoyed hiking, spending time on Graves Island and morning visits to Burger King with the "Liars Club". He was a member of the Dr. C.B. Lumsden Branch No. 74 of the Royal Canadian Legion, Wolfville and the White Rock United Baptist Church. He is survived by his first wife, Viola (Scott) Pick; daughter, Sandra (John) Cudmore; son, Timothy Hancock; grandchildren, Jillian (Graham Seymour), Joshua (Kalee) and Chad (Christine); great granddaughters, Sophia and Addison; sister, Velma Ibsen; a brother, Eddie (Faye Keith); numerous nieces and nephews. He is also survived by the children of his second wife, Linda and Curtis and their families. He was predeceased by his second wife, Nellie (Virtue) Hancock; sisters, Anna, Elva (Dino) and Marie (Bill) and Nellie (Art and Gordon); brothers, Albert, Harold (Gladys) and Earl (Jean); brother-in-law, George Ibsen. Visitation will be held from 6-8 p.m. Tuesday, February 13, 2018 with a Royal Canadian Legion service to be held at 6:00 p.m. in the White Family Funeral Home, Kentville. The funeral service will be held at 2:00 p.m. Wednesday, February 14, 2018 in the Gaspereau Baptist Church, Reverend Gary Manthorne officiating. A reception will follow in the White Rock Community Hall. A private family burial will be held in the White Rock Cemetery at a later date. The family wishes to express their sincere appreciation to Jocelyn Askew and the staff of Arbordale Seniors Home, for taking care of Robie for the past four and a half years and the many other caregivers over the past 10 years. Donations in memory may be made to the White Rock United Baptist Church or the Royal Canadian Legion Dr. C.B. Lumsden Branch No. 74. Funeral arrangements have been entrusted to the White Family Funeral Home and Cremation Services, Kentville.