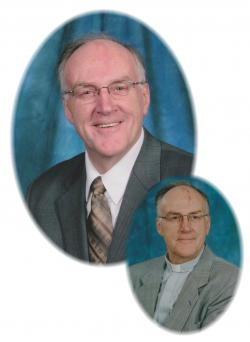 Rev. Ray A. Francis – 81, of Port Williams, NS, passed away on Tuesday, February 27, 2018 after a period of failing health. Born in Halifax on June 29, 1936, he was the eldest son of Rachael (Higham) Francis and James Augustine "Gus" Francis. Following the death of his father in October, 1940, the family moved to Sydney Mines, Cape Breton. Ray attended school there, then furthered his studies at Mount Allison University, Sackville, NB receiving a BA degree in 1957. Having felt the "call" to the Ministry, Ray studied theology at Emmanuel College, Toronto, graduating with a Master of Divinity in 1960. He chose Emmanuel as he wanted to study under an Old Testament professor, Robert Dobbie, who was very knowledgeable of the works of Paul Tillich, a well renowned philosopher and theologian. Following his ordination in The United Church of Canada, Ray served in pastorates in Nova Scotia (Maitland; Yarmouth) and New Brunswick (Glen Falls; Bathurst). In late 1980, Ray was named the Superintendent of the Children's Training Centre, Digby, NS and remained there till the closing of the Centre in 1992. Following this, Ray continued work with the Department of Community Services as an Adult Protection Worker in the tri-county area of Nova Scotia. He retired from this in 1997. Ray returned to the pastorate in November, 1997 serving the former Wolfville Pastoral Charge (1997 – June, 1999), and then the former Canard United Church, Kings Co., NS from 1999 - 2005. From July, 2005 – June, 2008, Ray had Interim Ministries in First United Church, Bathurst, NB; Woodlawn United Church, Dartmouth, NS and Waterville/Berwick United Churches, NS. In the communities where Ray served, be it Church or Government, he was involved in the church at the Presbytery level and in community volunteer work. Ray is survived by his wife, Sheila (Branch) Francis, Port Williams, NS; his daughter, Jeannie (Kenny) Snyder, Ashland, Virginia, USA; his son, John (Emily) Francis, South Mailtand, Hants Co., NS; his sister-in-law, Katherine Francis, Moncton, NB; his first wife, Arlene C. Francis, Truro, NS; as well as extended family members. He was predeceased by his parents; brother, Frank; a cherished cousin, Dr. Ross A. Stanway; and two children in infancy. Cremation has taken place. Visitation will be held from 6-8 p.m. on Friday, March 2, 2018 in the White Family Funeral Home, Kentville, where a Service of Celebration & Thanksgiving will take place at 2:00 p.m. Saturday, March 3, 2018. A reception will follow. Interment will take place at a later date in Sackville, NB. In lieu of flowers, donations may be made to the Valley Hospice Foundation, Orchard Valley United Church or a charity of your choice. Funeral arrangements have been entrusted to the White Family Funeral Home and Cremation Services, Kentville.