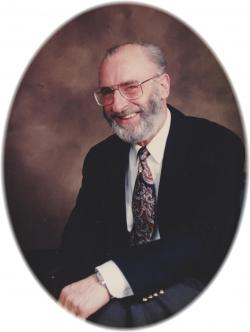 Grant Ezra Richardson - age 79, of Kentville, passed away on July 3, 2019 at Valley Regional Hospital, Kentville. Born in Moncton, NB, he was the third child of five and the only son of the late Ezra and Helen (Mollins) Richardson. Grant was a member of the Wolfville Baptist Church. Grant retired with his wife to Wolfville in 2000 after 26 years teaching high school math and physics. Grant was a gifted musician, playing trombone, piano, organ and uke. He enjoyed playing in several marching bands throughout the province including, Mrs. Burbank’s Band in Moncton until 1957; Acadia University Gentlemen of Swing (1960-1965); Truro Concert Band (35 years); Henley-on-Thames Symphony, England; Kings Co. Band; Chester Brass Band; New Horizons Band and sang in Nancy Denton-Peck’s Men’s Chorus. He was an organist and choir director for eight years in Truro and North River United. Grant was part owner of Grant’s Grocery in North River for five years and after a two year sabbatical in Henley-on-Thames, England doing a study on "apprenticeships" for NS Department of Education (1989-1990), Grant and his wife opened a four star Bed and Breakfast "The Silver Firs" in Truro, which they ran for nine years. Grant was very active in the Boy Scout Movement attending the World Jamboree as Silver Arrow Head International Boy Scout Patrol and President of his high school graduation class. While at Acadia University he was president of his Engineering Class. He graduated from Acadia with his BSc and BEd in 1965 after a year recuperating from a serious car accident. Grant loved to dance, especially jiving and always had a warm smile. He was loved by so many and was always the perfect gentleman. Grant is survived by his wife of 30 years, Beverley-Dawn Trites; sisters, Barbara Beatty, Shediac Bridge, NB; Kathy (Dennis) Morris, White Rock, BC; brother-in-law, Harold Crawford, Moncton, NB; brother-in-law, Frederick (Joan) Trites, Fredericton, NB; several nieces and nephews. He was predeceased by sisters, Joan Steeves and Grace Crawford; nephew, Doug Crawford. Grant had many special visitors on a weekly basis while in Wedgewood House, particularly his young friend, Maura, who gave him great joy. Grant’s family wish to express special gratitude to Michael and Yiwen Walsh and the staff and residents of Wedgewood House for Seniors who treated him with love and respect the two years he was in residence. Also a special thank you to step-son, Gary McCallum, Halifax, NS for his loyalty. Thank you to the staff and doctors on surgery at Valley Regional Hospital for all their care and friends and members of Wolfville Baptist Church, who were a special support to Bev during this journey, especially Chaplin Jennifer Longley and Reverend Doctor Scott Kindred-Barnes. Cremation has taken place.  There will be no visitation, by request. A memorial service, followed by a reception, will take place at 2:00 p.m. Friday, July 26, 2019 in the Wolfville Baptist Church. Family flowers only. Donations in memory may be made to the Wolfville Baptist Church - Elevator Fund, Acadia University Alumni, Diabetes Association. Funeral arrangements have been entrusted to the White Family Funeral Home and Cremation Services, Kentville.