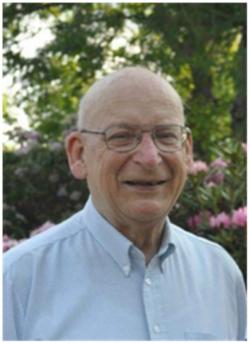 It is with great sadness that we announce the passing of Raymond Allen Hynes on 11 July 2019, aged 86. Born in Glace Bay, he was a son of Israel James and Ada Mary (Rose) Hynes. He also had a special connection with his step-father Sam Riggs, who Ray believed was a guiding force in his early life. He graduated from Morrison Glace Bay High School at the age of 15 and joined the Bank of Montreal in 1949. Ray served in several positions with the Bank in various communities, and retired in Wolfville after 40 years. He earned an Associate of the Canadian Bankers Association, was a Fellow of the Institute of Canadian Bankers, was confirmed in the Anglican Church of St. Mary's in Glace Bay, and served as a treasurer in St. Andrew's United Church in Wolfville. After retirement, Ray was manager of the Acadia University Box Office and was very engaged with the Performing Arts Series.  Ray served as a councillor for the Town of Wolfville from 1991-2000, during which time he was a member on many Boards, including the Residential Tenancy Board. Ray was a great lover of classical music and a master cookie maker. He was an accomplished woodworker and many heirlooms exist as a result of his work.  His greatest joy was completing crossword puzzles with his granddaughters. He was truly interested in people and much loved by everyone who met him. Ray is survived by his wife of 63 years, Dorothy (Chandler) Hynes; children, Jane and Michael (Paige), Wolfville; daughter-in-law Janet, Kentville; granddaughters, Margot, Karen, Jennifer, and Robyn; sister, Ada Valentine, Scotland; sister-in-law, Catherine Hynes, Glace Bay. He is predeceased by his eldest son, Haldane "Hal", sister, Louisa and brother, Gordon. Special thanks to the Dialysis Unit at the Western Kings Memorial Health Centre, Drs Lowe and Keough and staff of Med B Unit, Valley Regional Hospital, Kentville. Cremation has taken place. There will be no visitation, by request. The funeral service, followed by a reception, will be held at 2:00 p.m. Friday, August 23, 2019 in the Wolfville Baptist Church, Reverend Doctor Scott Kindred-Barnes and Pastor Jennifer Longley officiating. Burial will take place in the Willow Bank Cemetery, Wolfville. Donations may be made to the Atlantic branch of the Kidney Foundation of Canada. Funeral arrangements have been entrusted to the White Family Funeral Home and Cremation Services, Kentville.

"Every man moves on", says my father quietly... "but there is no need to grieve, he leaves good things behind. To everything there is a season."