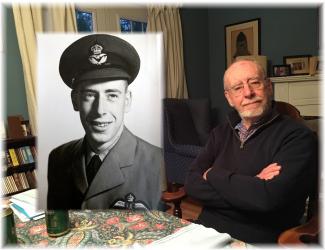 On December 27, after a beautiful Christmas, and at the centre of a circle of love, Flight Officer Peter John Austin-Smith Sr. died at home in Wolfville, Nova Scotia. Peter was born on May 11, 1932 in Galt, Ontario, to Cecily Harvey Williams and John Smith (both deceased), and grew up in Kitchener. An early school teacher, unimpressed by his progress, suggested that he would do better out in the woods. He listened, and became a junior forest ranger while still in high school, learning about wildlife and things that fly.

Peter joined the RCAF in 1951 and took pilot training in Gimli, Manitoba. As a member most notably of 408 Squadron, he flew Harvards, Mitchells, Dakotas, C-119s, B25s, Expeditors, and his favourite, the Canso. He claimed he had flown into every small town in Canada. One of the Cansos he flew is active in Fairview, Alberta, and another is on display in the War Museum in Ottawa. On a visit there, he got too close to the aircraft and was reprimanded by a guard. "See that dent?" he responded, "I put that dent there." Infamously, he also dented a hangar door in Gimli when he bent down in the cockpit to shut off oil and didn’t realize the wheels were still in motion on the icy tarmac. For his seven years as a military pilot, Peter flew search and rescue off the Queen Charlotte islands, was Detachment Commander for Arctic patrol, and flew Arctic resupply. He told amazing stories of flying up north, learning to land on water, and especially, of flying at night, in silence, with the moon and stars for company. He swore he could hear music in the engines on those flights.

After leaving the military in 1957, Peter earned a BSc from Cornell University, and began a PhD. He later taught Biology at Acadia University, supervising several Honours and MA students. He then set academia aside to work as a Manager of Non-Game Biology in the Department of Lands and Forestry. During these years as a wildlife biologist, he worked our small farm, supplying hay to Sackville Downs and wild blueberries to local farmers’ markets. He also opened and ran a record store in Wolfville. In the 1980s, he was part of a project to re-establish bald eagles in Massachusetts and another to re-establish peregrine falcons in the upper Bay of Fundy. Dad retired in 1991, but continued fieldwork, research, graduate supervision, and writing, especially on shorebirds and raptors. In 2003 he chaired the Canadian Committee on Animal Care sub-committee on wild animals. He wrote and published serious reports and papers, but never took himself too seriously. He once presented a conference paper on the migration patterns of Phoenicopterus ruber ornamentalis (aka plastic pink flamingoes) to a puzzled audience.

Devastated by his loss are Tish, his wife of sixty-two years, his children Brenda, Peter, and Lesley, daughter-in-law Gabrielle Breault, son-in-law Richard Kruk, beloved grandson Ian Kruk, sister Sandra Taylor, and many nieces and nephews. His sister Joyce Grant pre-deceased him. His sweet dog Gracie will miss sitting at his feet. Peter accepted people without judgment, and with extraordinary generosity. He loved us fiercely and without condition, with a heart as big as the sky. We again thank those who helped us through this heartbreak with such wisdom and kindness: Dr. Alison Wellwood, Dr, Ann Gordon, the VON, the EHS paramedics trained in the Special Patient program, Lynn Fudge, Fiona Peacock, and Heather Wade-Hewins.

The end of some restrictions means we can now safely hold a Celebration of Peter’s life on Friday, September 30, 2022, at the Acadia Faculty Club, 6 Park Street, from 2-4 p.m. The Club is located on a short street that runs between University Avenue and Westwood, just up from the Harriet Irving Gardens. We hope those of you who can join us that day will share stories, songs, bring and play some instruments, and raise a glass to Dad’s memory.

Interment will be held in Starr’s Point Cemetery on Saturday, October 1, 2022 at 2 p.m.

For those who wish to do so, donations can be made to the Peter Austin-Smith Sr. Memorial Fund at Acadia University online or by mail at 15 University Avenue, Wolfville, NS B4P 2R6. Funds will support a fieldwork student in Biology or related field of study.