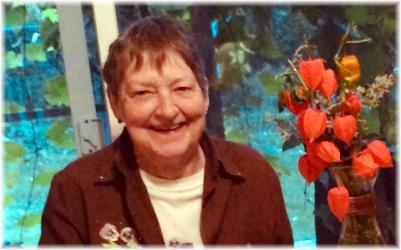 Edna Phyllis Roach – age 88, of Greenwich, passed away on Tuesday, January 7, 2020 in the Valley Regional Hospital, Kentville with family by her side. Born in Murray River, PEI, she was a daughter of the late John Martin and Rena (Jenkins) MacDougall. Edna worked for many years at various hotels in Halifax in the accounting field including, The Lord Nelson, Dresden Arms, The Nova Scotian and Keddy’s Motor Inn. She also worked at various jobs through the United States including Florida, California and Connecticut, where she lived for several years in the late 1960s and early 1970s. She retired to the Annapolis Valley 30 years ago and fell in love with the people and the land. Edna traveled extensively in her life to various places including Hawaii, Alaska, the Yukon and Europe. She also enjoyed many local excursions in eastern Canada with George Estey at the wheel of the bus. Edna was a member of many clubs and organizations in the Valley including her beloved churches St. Andrews United Church and the Orchard Valley United Church in New Minas. She enjoyed playing cards, bingo and was a patron of CenterStage Theatre in Kentville. Edna was known affectionately as the "Roadrunner" and it was known that you don't just drop in on her because she simply would not be there. She could be at Louis Millet for exercise classes and functions or at a card party in White Rock or perhaps with the Wolfville seniors group for cards and cake. She might be in Canning for a card party or luncheon, possibly bingo at the fire hall in Greenwich, breakfasts at Black River Hall and every Friday enjoying lunchtime with Pam and the gang at the Superstore. Edna was always known as a straight shooter and gave you her honest opinion. She was hardworking and practical and often was not only a member of a club or organization but she was often a leader and the "go to" person. She was not someone to ask for help for herself but she was helpful to so many others. All of her life, she was a strong independent woman who worked very hard for herself and for others. Edna loved her community, her friends and her family. Edna is survived by her brothers, David "Hoover" Bedford, Franklyn, Lequille, Darryl, British Columbia; many nieces, nephews and cousins. Besides her parents, Edna was predeceased by sisters, Joanne (in infancy), Marina and Thelma; brothers, Stanley, John "Jack" and Gerald. A special thank you to Reverend Don Sellsted and to neighbours Barb Parsons and Gwen Ells for their care and support. Thank you to the physicians and staff of the Valley Regional Hospital. Cremation has taken place and there will be no visitation, by request. A celebration of Edna’s life and reception will be held at 1:00 p.m. on Wednesday, January 15, 2020 in the Orchard Valley United Church, New Minas.  Burial will take place at a later date in the Camp Hill Cemetery, Halifax. Donations in memory may be made to Orchard Valley United Church. Cremation has been entrusted to the White Family Funeral Home and Cremation Services, Kentville.