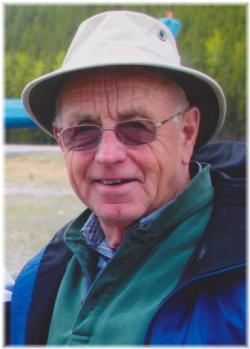 Orley Eber Rafuse - age 77, of New Ross passed away peacefully on Friday, January 10, 2020 in the Valley Regional Hospital, Kentville. Born on May 30, 1942 in Wolfville, he was a son of the late Charles Delmar Rafuse and Gladys May (Legge) Rafuse. Orley lived his entire life in New Ross on the family homestead and made many friends, wherever he went. When asked about his occupation, Orley simply replied that he was a "Jack of all trades and a master of none". He had a passion for heavy equipment and at a very young age was driving his father’s log truck and dump truck. He soon met the love of his life, Lorraine (Rines) and they were happily married for 55 years.  Together they worked side by side to build Orley Rafuse Trucking and Backhoe Limited. While Orley was greeting customers and running equipment,. Lorraine was busy at home answering calls, picking up parts and running the office. At first, Orley worked for his father running the family farm and trucking gravel and pulpwood. After his father became ill, Orley acquired more construction equipment and branched out. He was contracted by Minas Basin Pulp and Paper for 27 years and had many employed with logging and Christmas trees. As time went on Orley spent more of his time doing backhoe and excavation work and this became his main focus. He spent long hours, from daylight to dark running the equipment and often worked well into the night, repairing his gear so his crew could work the next day. During the winter months, he was often seen before daybreak, clearing snow for the local school and various businesses in the community. He always felt that retirement wasn’t for him, so he continued with the help of his longtime employees, Gerhart Lenihan ran the log trucks for Orley for 50 years and Llewelyn Lenihan ran the excavating equipment for the last 16 years. Both of these men were more like brothers to Orley and not just employees. In Orley’s spare time, he enjoyed quiet time spent at home with family, puzzles, coffee with the guys, travelling and he always took a keen interest in any piece of equipment he may have encountered. Orley’s daughter, Heather always had a special place in his heart and her husband, Mike was the son he never had. Orley was blessed with two grandsons, Caleb and Corbin and they were the apples of his eye. Orley was a member of the Lunenburg Trucker’s Association, the Lunenburg County Christmas Tree Association, was a Trustee of Mill Road Baptist Church and the Baptist Cemetery and served various other Trade Associations. Orley was predeceased by his brother, Chesley Rafuse, a daughter, Annette and a niece, Brenda Lee. Cremation has taken place. Visitation will be held from 12:00 p.m. until the time of the funeral service at 1:00 p.m. on Wednesday, January 15, 2020 in the White Family Funeral Home, Kentville, Pastor David Hine officiating. A reception will follow in the funeral home reception room. A private family burial will take place in the New Ross Baptist Cemetery. Donations in memory may be made to New Ross Volunteer Fire Department or to a charity of your choice. Funeral arrangements have been entrusted to the White Family Funeral Home and Cremation Services, Kentville.