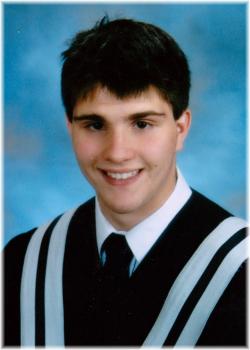 ** Please be advised that all services for William Alexander"Alex" Trueman are postponed until a later date - to be announced, due to health concerns surrounding the Coronavirus pandemic.**

William Alexander "Alex" Trueman - age 30, of Arlington, Kings County, NS, passed away Thursday, December 12, 2019, in Phnom Penh, Cambodia. Born June 15, 1989, in Kentville, he was the son of William A. Trueman and Anne (Sutton) Trueman. Alex graduated from Northeast Kings Education Centre in Canning, NS and attended Saint Mary’s University, Halifax, NS. He had been employed as a landscaper in Edmonton, Alberta and most recently as an English as a Second Language Teacher in Hanoi, Vietnam and Phnom Penh, Cambodia. He was very involved in soccer, both locally and provincially. He played from age four to thirty with some of the same friends all those years. He also played basketball and tennis and was a tennis coach for youth in Canning. Alex always wanted to help disadvantaged children and followed his heart to a part of the world where he felt needed. Young children were always drawn to his gentle and accepting nature. His friends were very important to him and he always considered each one special. 4H, especially caring for animals, was natural for him. He had an exceptional talent for drawing and writing, and loved board games and reading. He is survived by his parents, sister, Stephanie Trueman; nephew, Issac Mannette, and niece Chloe Mannette, Halifax; aunts and uncles, Hazen and Jill Trueman, Lower Kingsburg,  Heather and Bob Jones, Greenwich, Donna Sutton, Bridgewater; cousins, Cate deVreede, David Trueman, Rebecca Jones, Matthew Jones, Stephen Smith, and Alison Smith. In addition, he was predeceased by his grandparents Rev. Whitley and Gerry Trueman and David B. and Leona Sutton, and uncle, David D. Sutton. Cremation has taken place, and there will be no visitation by request. Service arrangements have been postponed until a later date - to be announced. Family flowers only. Donations in memory may be made to Kings/ West Hants kidsportcanada.ca, https://www.kidsportcanada.ca/ nova-scotia/kings-west-hants/. A soccer game will be played, at a later date, to remember Alex and his love for his friends and the game. Funeral arrangements have been entrusted to the White Family Funeral Home and Cremation Services, Kentville. On-line condolences and inquiries may be directed to www.whitefamilyfuneralhome.com.