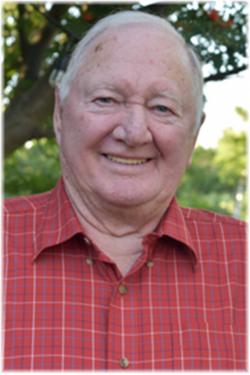 Jerrold David "Jerry" Tribble – age 84, of Hortonville, NS passed away peacefully surrounded by his family on February 11, 2020 in the Valley Regional Hospital, Kentville, NS. He was a son of James and Iris Tribble of Sherbrooke, QC. He lived in Sherbrooke, Montreal, North Hatley, Quebec and Hortonville, where he raised a boisterous family of six daughters and one son.

In 1976, Jerry purchased a lovely property overlooking Cape Blomidon and the Minas Basin and built his house (by himself) in Hortonville. Shortly after the house was built, he planted a vineyard, one of the first in the Annapolis Valley. After retiring as a Sales Manager for 3M Corporation, his time was spent in his vineyard and the Ken-Wo Golf Club. Whether it was after a round of golf or a day on his tractor, Jerry always enjoyed a cold beer and bullshitting with family and friends. Eventually golf became his favorite pastime and he stopped growing grapes to have more time to visit his children and grandchildren. It was a grand occasion whenever Grandma and Grandpa visited and always celebrated with large family meals and lots of clinking glasses. Jerry's legacy will include spirited family gatherings with much cheer and laughter.

Cremation has taken place and a private interment will follow at a later date in the Lower Horton Cemetery. Kind thanks to the nurses, doctors, and staff in the Valley Regional Hospital whose care for Jerry will forever be appreciated. Donations can be made to the charity of your choice. Arrangements have been entrusted to the White Family Funeral Home and Cremation Services, Kentville. On-line condolences and inquiries may be directed to www.whitefamilyfuneralhome.com