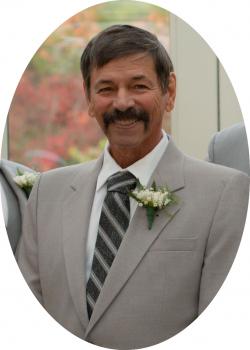 Harry Frederick "Bunker" Spencer Jr. – 66 of Kentville passed away Sunday, May 3, 2020 at home. Born in Kentville, he was a son of Lillian (Graves) Spencer, Kentville and the late Harry Spencer Sr. Bunker was a hardworking man and worked alongside his father and brother in the family well drilling business for many years. In his early years he enjoyed playing hockey. Bunker had a love for music and could often be seen with his guitar in hand. He was well-known throughout the Annapolis Valley and beyond for musical talents. There was no job he couldn’t do, including fixing up old cars or doing his own house renovations. He took pride in his work and was a perfectionist, if it was not perfect it simply was not good enough. Bunker is survived by his wife, Cindy (Mitchell); a daughter, Rose Marie Spencer, Cambridge; a son, Cory (Chelsey), New Minas; sisters, Rose McNeily, Windsor, ON; Christine (Roscoe) Parker, Windsor, ON; Pam (Terry) Dill, Kentville; Debbie Vallianatos, Florida; brothers, Edward (Nancy), Waterville; Steven, Kentville; Rick (Liz), Kentville; grandchildren, Brock and Emma; several nieces and nephews. He was predeceased by a son, Richard "Rick"; a sister, Patricia and brother, James. Cremation has taken place and due to Covid-19 restrictions, a funeral service will take place at a later date in the White Family Funeral Home, Kentville. Burial will take place in the Elm Grove Cemetery, Steam Mill, also at a later date. Donations in memory may be made to The Lodge That Gives. Funeral arrangements have been entrusted to the White Family Funeral Home and Cremation Services, Kentville.