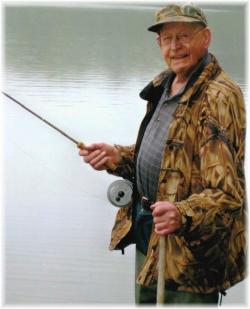 Earl William Meister - age 96, of Lovett Road, Coldbrook, passed away on Sunday, May 10, 2020 at Shannex - Blomidon Court where he had resided for the last two years. Born in Kentville on June 16, 1923, he was a son of the late Melvin and Ida May (Russell) Meister and husband of the late Kathleen (Ogilvie) Meister. Earl started working on Ken Ogilvie’s farm in his late teen years, living in a bunkhouse with other farm workers. He often recanted stories about the hard work there but also the fun times they had together. In the late 1940s Earl started work at Scotian Gold Coop as a carpenter’s helper building the plant. Earl worked his way up and retired from Scotian Gold after 35 years of employment, including his 25 years as the plant manager. During his years at Scotian Gold he spoke fondly of both the staff and the farmers that he worked with. He often joked that he thought about apples and the plant 24 hours a day. After retirement in the early 1980s Earl went to work for the Department of Agriculture in crop insurance for five years. He was a former member of the Kentville Masonic Lodge No. 58 and the Evangeline Chapter of the Order of the Eastern Star. Earl had many hobbies but the three he was most passionate about were hunting and fishing, gardening and reading. Many hours of his life were spent in the woods, fields and waterways all across Nova Scotia enjoying the outdoors with family and friends. In the spring he found great joy in getting his vegetable garden planted and keeping it meticulously tended to. Earl loved to read about history, especially the early pioneering accounts of both North America and Nova Scotia. No matter what Earl was doing, he always had a faithful dog by his side. Earl was a kind and genuine man and always enjoyed welcoming family and friends into his home. Earl was the last surviving member of his immediate family. In addition to his spouse and parents, he was predeceased by his sons, Frederick and Richard; brothers, Henry, Carl and George; and sisters, Dorothy Mitchell, Frances Morley and Minnie Mitchell. He is survived by his grandchildren, Ann-Marie, Halls Harbour; Stephen, Elmsdale; Jeffrey (Gail), Coldbrook; Budd, Alberta; and Brent, Kentville; and great-grandchildren, Jordan, Spring, Seth, Jessica and Aidan; as well as three great great-grandchildren. There will be no visitation by request. A private family graveside service will take place at Elm Grove Cemetery, Steam Mill. Donations in memory may be made to Shannex - Blomidon Court (Social Fund). The family would like to extend a sincere thank you to the staff of Shannex - Blomidon Court for their exemplary care provided. Funeral arrangements have been entrusted to the White Family Funeral Home and Cremation Services, Kentville.