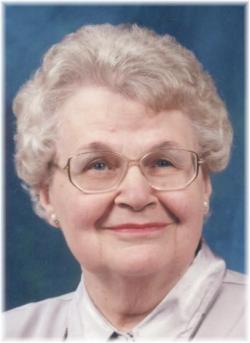 Dorle was born in Breslau, Germany, April 29, 1927. She grew up in Breslau, and after the war attended the Pedagogical Institute of Leipzig. In 1946 she married Harald Weiland. Both she and her husband taught school in East Germany and in 1952 they immigrated to Canada with their two children and from 1954 to 2013 lived in New Germany, Nova Scotia. In 2013 they moved to Wolfville to be near family.

Dorle started her thirty-four year teaching career in Canada in 1954, in a small one room school in Nineveh, not far from New Germany. She taught in New Germany for the next thirty-three years, ten years in South Rosedale School and twenty-three years in New Germany Consolidated Elementary School. Most of her teaching years were spent in class rooms with often more than thirty children who were all around five or six years old, an intimidating task for most people. In so doing she awed her fellow teachers and left permanent and favourable impressions in the memories and careers of the hundreds of young academics she launched from her classroom.

Her great passion in life, besides her family, was Girl Guides of Canada. She served in many noteworthy roles with the Guides. She began as a Brownie leader in 1959 and over the next fifty years held numerous leadership positions at the local, regional, provincial and national levels of the Girl Guide organization. She was president of the New Germany Local Girl Guide Association, Lunenburg County Division Commissioner, Provincial Leadership Training Commissioner, Provincial Music Advisor, Deputy Provincial Commissioner, and spent a four year term on the Girl Guide National Council of Canada. Her role as trainer, which she had for decades, meant the most to her as she loved to share her skills, insights, and her boundless enthusiasm for Guiding. In appreciation for her exceptional service she was granted a lifetime Girl Guide membership and in 1990 the Guides bestowed their highest honour, the Beaver Award.

Numerous other community volunteer initiatives kept her busy. She was active onstage and behind the scenes with the Bridgewater Hospital Chorus for thirty-two years. For her it was fun-filled community entertainment that raised funds for the Bridgewater hospital. On a more consequential note, she spent eighteen years on the South Shore Regional Hospital Foundation board of directors and nine of those years as chairperson. She helped raise millions for the new hospital. She spent forty-six years as a member of the New Germany branch of the Canadian Cancer Society. Every year she canvassed door-to-door, helped organize the Terry Fox run and managed the annual Daffodils sale. These activities were much more than diversions or distractions but were deeply rooted in a commitment to her community, to making the world a better place.

And for this she was acknowledged by her people. Not only did the Girl Guides grant their highest award, but she received numerous recognition awards from the local community and from the provincial and national levels. For her outstanding community volunteer work, for her service to youth and teaching, she was granted three national awards. In 1977 she received the QE II Silver Jubilee Medal, in 1992 the Confederation 125 Medal, and in 2002 she received the QE II Golden Jubilee Medal. She was always humble about her accomplishments and these acknowledgements and steadfastly remained focused on how she could contribute.

After Dorle and Harald retired from teaching they loved to travel. They often visited relatives in Germany, took numerous river cruises in Europe and ocean cruises in the Pacific and Caribbean, and Dorle often accompanied Harald when he travelled for international Masonic meetings. They sometimes considered moving back to Europe, however, on each return home from a trip abroad they were grateful to be back in peaceful New Germany and their many friends.

Despite all her activities and many travels she remained first and foremost committed to her family, to her husband of seventy years, her children, grandchildren and great grandchildren. Compassionate, generous, kind to everyone, all who knew her loved her. She will be sadly and deeply missed. No words can convey what a wonderful being she is.

Due to the pandemic there will not be a funeral service at this time. Donations in Dorle’s memory can be made to the Canadian Cancer Society-Nova Scotia Division, the R.A.M. Glaucoma Fund at the QEII Foundation or to the charity of your choice. Funeral arrangements have been entrusted to the White Family Funeral Home and Cremation Services, Kentville.