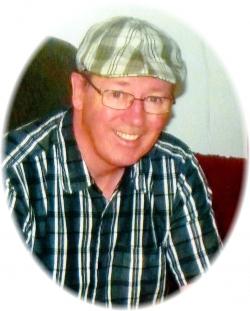 Terrance Lloyd "Terry" MacDonald – 72 of Kentville, passed away on Monday, July 6, 2020 in Shannex – Orchard Court, Kentville. Born in Sheet Harbour, he was a son of the late Angus and Marie Roberge (Johnson) MacDonald. At a very early age, Terry knew what he wanted to be when he grew up, a policeman, following in the footsteps of his grandfather, Clary Johnson of Dartmouth, Nova Scotia. Terry worked in policing in several towns in the Annapolis Valley, including Berwick, Middleton and Hantsport. During his career, he also worked in the provinces of Alberta and Ontario. Terry received several commendations during the years he worked as a police officer. He loved his job and was very happy every day to go and do his duty. He was well liked among his peers, as well as people he met around the towns he worked. Terry often spoke fondly of his buddies on the force and remained friends with many of them all his life. After Terry retired, he loved to go to McDonald’s in New Minas to have morning tea with his friends and continued to do this until his health no longer allowed him to do so. He loved dancing at the Kentville Legion and had a great love for all types of music, especially Elvis. Terry is survived by his wife of seven years, Helen (Reid) MacDonald; her children, Jamie Harper (Alana), Bedford and Bobbi Harper, Woodville; his brother, Clarence (Glenice) MacDonald, Miramichi, NB; seven nieces and nephews. He was predeceased by his sister, Jean Smith and his brother, Blair MacDonald. A special thanks to his caregivers at our house the last two years allowing Terry to stay at home. A very special thank you to Sally Jess and Laurinda Richard of Orchard Court, Terry and I loved you guys. Thank you to everyone at Orchard Court for taking care of Terry during his stay and for being so nice to me, where it became my second home. To Dr. Gunn who continued to see Terry at Orchard Court during his entire stay there, thank you. May God bless you all for the work you do. Cremation has taken place and there will be no visitation. At the request of the family, a public funeral service will be held on Saturday July 11, 2020 at 11:00 a.m. in the White Family Funeral Home, Kentville, Pastor Raphael Funwa and Reverend Sarah Stevens officiating. Due to pandemic restrictions, seating is limited to 60, an on-line video webcast of the service will be available. A private burial will take place at a later date in the Berwick Cemetery. Donations in memory may be made to the Alzheimer Society of Nova Scotia. Funeral arrangements have been entrusted to the White Family Funeral Home and Cremation Services, Kentville. For on-line condolences, inquiries and video webcast please visit www.whitefamilyfuneralhome.com.

Click here to View Condolences
Service Date
Saturday, July 11, 2020
Service Time
11 am
Service Location
White Family Funeral Home
Visitation Location
There will be no visitation, by request.
Burial Location
Burial will take place at a later date in the Berwick Cemetery
Requested Charity
Donations in memory may be made to the Alzheimer Society of Nova Scotia