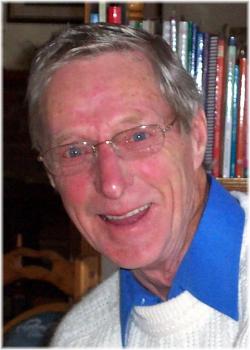 Gerald Lloyd "Gerry" Hoare, 90, passed away on June 28 at Valley Regional Hospital in Kentville after a courageous battle with cancer. Born in Truro and raised in Mulgrave, he was a son of the late Frederick Freemont Sears and Daphne (Bent) Hoare. He leaves behind his wife of 68 years, Marcia (Morse) Hoare, sons Michael, Peter, and Mark (Susan) and daughters Glenna Prime (Jim) and Heather Millett (Jim). He also leaves behind 8 grandchildren and 5 great grandchildren. He was pre-deceased by his brother Karl and his sister Jean (Middlebrooks). After graduating from Mulgrave High School at the age of 17 Gerry began a 32-year career with MT&T as a surveyor, lineman, installation and repair man, test man, and dispatcher. He retired as a "Pioneer," and immediately embarked on a second career as manager of medical and surgical supplies at Digby Regional Hospital, where he remained for another ten years. While working for MT&T in Middleton in 1952, Gerry met a pretty young operator named Marcia Morse at a Sadie Hawkins dance. He soon showed that he was a pretty good operator himself, sweeping the young lady off her feet and making her his wife. Gerry didn’t just install phones, he created permanent lines of communication with customers throughout Digby County. As a result of these relationships, he frequently returned home with quantities of lobster, fresh fish, cherries, and an abundance of other delicacies.  More importantly, he returned with stories, enough to regale friends and family for a lifetime. The original Mr. Fix-it, Gerry often claimed that the only things he couldn’t fix were "a broken heart and the crack of dawn." His volunteerism in the town of Digby knew no bounds and included the Boy Scouts, where he spent 20 years as a scout leader and 5 as a field master. He was instrumental in establishing and maintaining the Digby Museum and was an original member of its board. Gerry served three years on the town council where his practicality and wisdom were valued. A regular church goer, he served on numerous boards and even took over the pulpit on several occasions. Aside from his official volunteerism, he was usually the first person that neighbours called in emergencies, large and small. He repaired everything from clocks to furniture to lawn mowers to small engines to appliances to high school band instruments - and there are few Digby landmarks that haven’t benefitted from his profound sense of community. His humour was legendary and his interests infinite. He created model ships and planes, and was an avid curler and bowler. While the world is poorer for his passing, Heaven has gotten a versatile asset. If a squeaky hinge on the Pearly Gates requires some oil or an angel’s harp is in need of restringing, Gerry will be there to lend a hand. Who knows, with God’s help, he might finally be able to solve the "crack of dawn" conundrum. And when the odd jobs are finished for the day, he’ll no doubt be found lounging on a cloud entertaining the angels with his endless supply of well-practiced jokes and anecdotes.  Gerry will be remembered for his kindness, his gentle humour, and his uncanny ability to turn complete strangers into long lost friends.  He’ll also be remembered for the bluest eyes and quickest smile in all creation. The family wishes to thank Dr. McClure and Dr. Morgan as well as Tracy, Denise and the staff of Medical B Extension for their compassionate care of Gerry and their efforts to establish family access during COVID-19 restrictions. In lieu of flowers, donations in his memory can be made to the Canadian Cancer Society. A funeral service will be held at a later date. Arrangements have been entrusted to the White Family Funeral Home and Cremation Services, Kentville.

Click here to View Condolences
Service Location
At a later date
Visitation
There will be no visitation, by request
Requested Charity
Canadian Cancer Society