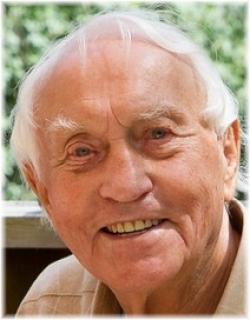 Werner Georg Riedel, 11th July, 1923 - 3rd September, 2020. Born in Schoenbach, Germany, Werner Riedel passed away peacefully in Kentville, NS on September 3, 2020 with his immediate family close by his side. Werner will be remembered by all whose lives he touched over the past 97 years. A proud and private man who enjoyed life to the very end. Having decided to move to Canada at the ripe age of "only" 75, with very little English. A lover of the outdoors he enjoyed motor home traveling to satisfy his ‘Wanderlust’. Together with his beloved ‘Gila’ they traveled to all parts of Europe. In his Golden years he was determined to get to know all of North America and especially Canada to the fullest, even including Mexico, Alaska and every state of the USA before hanging up their Travel-Keys. Somewhere along the way he developed the ‘Flying bug’ and, after getting his pilot license enjoyed many wonderful flights all over Germany and Europe. During his late-life career change from Engineer to Vocational School Teacher in Cologne, Germany he was much loved by his students to a point that he had a steady stream of student-visitors while in hospital, after an unsuccessful attempt to teach the young-guys how to play volleyball. In his engineering career, he designed and supervised the building of some of the biggest and best Gantry-Cranes in Europe and the Middle East. His "working" career started when he got drafted to fight in the last war and spent the war years in the boiler-room of various U-Boats. Several were sunk but he managed to survive them all. After the war he ended up in what became East-Germany and had to escape communism through the fence to West-Germany. Werner leaves behind Gisela, his wife of over 67 years; his son Juergen (Louise); his beloved granddaughters Joanne and Maike; and his great grandchildren, Noah, Emma, Kagen and Quinn, all of Edmonton, AB. Werner led an extraordinary life right to the end. He will be missed by all who had the pleasure to know him. A special thank you is deserved for the fantastic EMS crew and all the medical staff at the Valley Regional Hospital, Kentville – a truly AMAZING group of people. Thank You All. Donations in memory may be made to a charity of your choice. Cremation has taken place. There will be no visitation or funeral service by request. Funeral arrangements have been entrusted to the White Family Funeral Home and Cremation Services,Kentville.