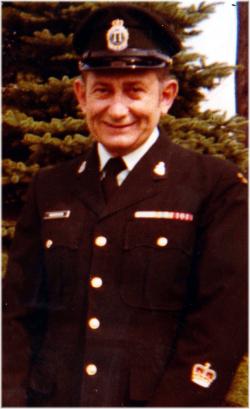 It is with deep sadness we announce the peaceful passing of Wallace William "Wally" Maddison, 86, of Berwick, Kings County on Thursday, September 10, 2020 in the Grand View Manor, Berwick. Born in Drumheller, Alberta, he was a son of the late Matthew and Florence (Bowman) Maddison. Wally moved to Vancouver, BC at an early age, where he lived until joining the Armed Forces. He earned the rank of Warrant Officer in his 35 years of service. After 25 years he received the Canadian Forces’ Decoration (CD) Award, as well as a Korean Decoration. During these times, he served in Korea, Egypt and Germany as well as other postings in Canada. His last four years were with the cadets in 14 Wing Greenwood. In 1955 while posted in Aldershot he went to buy a pen at R.D. Chilsholm’s, Kentville. It was there he met Una Pearle, they married in 1956 and celebrated their 64th anniversary. Wally had a great fascination for curling and woodworking, making many items for family and friends. His curling interest lasted over four decades, attending Brier’s in Winnipeg and Halifax as well as playing in the Berwick Senior League after retirement. After serving God faithfully for 54 years, his last place of worship was Waterville Baptist Church, where he was a member. He is survived by his wife Una; sons, Steven, Ottawa, Ontario; Gary (Marlene Bishop), New Minas; Goddaughter, Christina Bigelow, Woodville; grandchildren, Matthew (Ashlie) Maddison, Leduc, Alberta, Brennan (Ashley) Maddison, St. Albert, Alberta; Virginia and Lauren Maddison, Ottawa, Ontario; great-granddaughter, Everleigh Maddison, Leduc, Alberta; sister-in-law, Lee LaRoche, Hudson, New Hampshire; niece, Carol Eldridge, Hudson, New Hampshire; and special friends, Gordon and Shirley Goossen, Winnipeg, Manitoba; Bob and Shirley Robertson, Quispamsis, New Brunswick; John and Irene Drew, Weymouth, Nova Scotia; Wayne and Wanda Steadman, Waterville, Nova Scotia. In addition to his parents, he was predeceased by his brothers, Tom in the Second World War and James in the Korean War as well as his Godson, Pastor Timothy A. Bigelow. A heartfelt thank you to Dr. C. Mercer and the staff of Grand View Manor for the care given to Wally. Your love for him and his for you were equal. There will be no visitation, by request. A public graveside service will be held at 10:30 a.m. on Wednesday, September 16, 2020 in the Lakeview Cemetery, Lakeville, Kings County, Pastor Christina Bigelow officiating. Due to the COVID-19 pandemic, masks will be required and please bring your own chair. A webcast of the service will be available at 2:00 p.m. on Thursday, September 17, 2020. Family flowers only, by request. Donations in memory may be made to the Waterville Baptist Church, the MS Society, the Alzheimer Society of Nova Scotia or to a charity of your choice. Funeral arrangements have been entrusted to the White Family Funeral Home and Cremation Services, Kentville. For on-line condolences, inquiries and to view the service please visit www.whitefamilyfuneralhome.com.