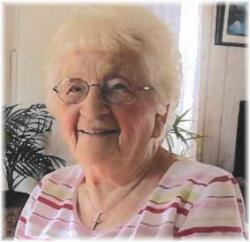 It is with great sorrow and sadness that we announce the passing of our Mother, Evelyn Poirier on September 27, 2020. She departed this life peacefully in her sleep at the age of 101 years, 57 days short of what would have been her 102nd birthday. A lifelong native of Nova Scotia, Evelyn was born in Poulamon, Richmond Co. Cape Breton. She was the youngest of 16 children (5 sisters and 10 brothers) born to Dominic & Elvina Fougere. Evelyn was preceded by her father, mother, husband, her sisters, brothers along with many nieces and nephews. Evelyn is survived by her three children, Wayne (Diane), Lois (Ken) Meech and Ken; six grandchildren, Roy, Kim, Brad, Kevin, Michelle and Robin; 11 great grandchildren, Scott, Abby, Ashley, Danielle, Luc, Courtney, Megan, Sam, Ben, Brady, Olivia. She loved her husband Bert and the three children they raised together.  This was also the same for her six grandchildren and 11 great grandchildren and we all loved her back for who she was. She never hesitated to provide her support and love for whatever the situation called for. She would proudly boast about all of us and always making sure we were aware of her feelings. Evelyn spent her youth growing up in Poulamon with her parents and some of her siblings. When it was time for her to strike out on her own, she moved to Halifax for the first time working at the Halifax Infirmary in a Clerical Role. Evelyn and Bert were married in January of 1941, a few years later, starting a family with their first child, a boy, followed by a girl two years later, another boy followed eight years later. The family moved to Halifax in the late 50’s where she continued to raise her family. Once her family had grown, she took a job at the Jubilee Boat Cub first as a waitress, later moving into the kitchen and becoming the Head Chef, she finally retired in the early 70’s. Evelyn and Bert moved back to Poulamon in 1980 where she remained until a few years ago. Mom was an avid sports fan, she would stay up all hours of the night to watch her sports (Montreal Canadiens being her beloved team). One of her greatest thills regarding the Montreal Canadiens came when on one of her birthdays, when in her mid-90’s she received a call, it was a retired Montreal Player, he was told, it was her birthday and about her dedication to the Team all of her life, so he wanted, on behalf of himself and all present and former players, so he took the time to call her personally to relay the well wishes and for her lifelong support of the Team. That player was Ken Dryden. It became one of her cherished memories that she spoke of when an opportunity presented itself. She also enjoyed watching the Blue Jays but only after the Expos moved to Washington. She was a true fan to both. She was also a gifted card player. If a deck of cards appeared, you could always count on her to join in (45's being one of her favorites, no crib please.) For those who were fortunate enough to interact with her they came away with a great feeling as she was such a positive person with a very big and kind heart. She was a very skilled cook who liked nothing more than to feed her family and friends. Many of her recipes will continue to be passed on for years to come, as they had been passed down to her. A graveside service will take place on Saturday, October 10, 2020 at 11:00 a.m. in the D'Escousse Cemetery, 3276 NS-320, D'Escousse, NS B0E 1K0. We would like to take this opportunity to thank Dr. Burgoyne and the staff at the Wolfville Nursing Home for the care plus the genuine concern they showed to our Mother during the time that she was a resident at the Home. Donations may be made in her name to the charity of your choice. Funeral arrangements have been entrusted to the White Family Funeral Home and Cremation Services, Kentville.