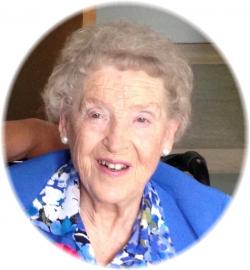 Janke Jones (van Woerden), formerly from New Minas was called home to her Lord on October 11, 2020 at Evergreen Home for Special Care. Born October 3, 1926 in Zeist, Holland, she was a daughter of Jacob and Wietske (Schaap) van Woerden. Janke was the wife of the late Gerald Jones who she met during World War II when Canadian soldiers liberated Holland in 1944.  They were married in Holland in 1948. She attended Nursing School in Leyden, Holland but was forced to return home due to the war. She kept this dream alive when she graduated from the Halifax Infirmary School of Nursing in 1974, at the age of 47. She worked for many years at the BFM Hospital in Kentville eventually becoming the Head Nurse of the Maternity Ward and was one of the first Certified Lactation Consultants in Nova Scotia. She is remembered fondly by many mothers for her assistance with their deliveries and breastfeeding. She was an active member of the New Minas Baptist Church and more recently the North Alton Baptist Church and was a faithful witness in her Christian walk to the end. Janke loved to sing and even in her last years would sing (in English or in Dutch) with a smile on her face saying "I’m so happy". Janke loved to travel and she and Gerald made many extensive trips together. Janke was hardworking whether in her career, sewing clothes for her family or on the farm; even learning how to milk a cow. Janke is survived by her four daughters: Anna-Maria (Brian) Bent, Prospect, Kings County; Louise Smith (Tony Burns), Oromocto, NB; Sheila Levy, Halifax; and Marina Hamilton, Dartmouth. She is also survived by 11 grandchildren (Tyler Bent, Bridget Dugas, Meagan Duncan, Leisha Scanlan, Stephanie Smith, Heather Smith, Melanie Rebelo, Kirk Levy, Lauren Levy, Jessica Hamilton and Jayna Hamilton); 11 great grandchildren (Alex and Mikey Rebelo, Vinnie, Victoria, Xavier and Maria Scanlan, Edith and Agnes Bent, Mischa and Brielle Dugas) and numerous cousins, nieces and nephews in Canada, USA and The Netherlands. Janke was the last surviving member of her immediate family having been predeceased by her sisters, Wietske (in infancy), Wytske, Wiep, and Anna Maria in The Netherlands and was predeceased by her husband of 50 years, Gerald Jones. A private funeral service will be held in the White Family Funeral Home Chapel, Reverend Leon Langille and Reverend Virginia DeAdder officiating. An online webcast of the service will be available at 5:00 p.m., Thursday, October 22, 2020. For those who wish, donations may be made to the Alton Baptist Church, CNIB, or Valley Regional Hospital. Family flowers only. Funeral arrangements have been entrusted to the White Family Funeral Home and Cremation Services, Kentville. For on-line condolences, inquiries and to view the service please visit www.whitefamilyfuneralhome.com.