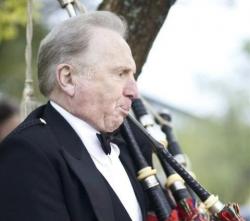 It is with broken hearts that we announce Donald Alphonsus "Donnie" Chisholm of Cambridge, Kings County, NS passed away peacefully at home surrounded by his loving family at the age of 83 on November 6, 2020 after fighting a horrendous battle with cancer like a true Scotsman.

FEROS FERIO (I AM FIERCE WITH THE FIERCE)

Donnie was a member of the St. Joseph’s Roman Catholic Church, Kentville and served as an altar boy along with his life-long friend the late Father David Stokes. They enjoyed many activities together including Boy Scouts in which they accomplished the highest achievable award "A Queen Scout". They also learned to play the bagpipes which started the beginning of Donnie’s piping journey. The personal joke between them was David took the "High Road" and Donnie took the "Low Road".

In 1952 after three months of learning to play the pipes he joined the Air Cadet Pipe band. During the four years with the band they played many local events including the Natal Day Parades and Air Force functions around the Maritimes. The most memorable being the official opening of the Canso Causeway in 1955 in which he was one of the 100 pipers that lead the parade. In 1956 he joined the Pipes and Drums of the 1st Battalion Black Watch (RHR) and for 3 years played in many Tattoos over North America and Bermuda and appeared on two post cards distributed by the Black Watch.  The band also participated in many Highland Games throughout the Maritime region including the Apple Blossom Parades in Kentville. In 1959 he became employed by CP Railway as a Station Agent until the closure of the Waterville Train Station, he was transferred to the CPR Signal Department as a Signal Maintainer until the railway closed in 1985 at which time he became self employed growing tobacco, grapes and operating a gravel pit.

He returned to the Air Cadet Pipe Band until the end of the 1970’s when it disbanded. Some of the former members formed a new pipe band and he was voted in as the first Pipe Major. They became the Kentville Fire Department Pipe Band. By 1973 the band became too large for the Fire Hall and a move was made to the Royal Canadian Legion Ortona Branch #69 in Berwick. The pipe band was later renamed the Kingscots Pipe Band. He remained Pipe Major until 1983. During his time with the pipe band they received numerous first place awards across the province. They played for the Queen of England in Kentville NS during her visit in 1976.

In 1976 he was the chief instructor for the Nova Scotia Highlanders summer camp at Camp Aldershot and taught anyone who was interested in learning the art of playing the bagpipes. In the year 2000 he was included in the Pipers of Nova Scotia Biographical Sketches 1773 to 2000 book compiled by Scott Williams.

Along with many wonderful traits being a dreamer was one of them. This trait led to many accomplishments in his life including building two family homes, three barns, a 75 ft greenhouse, and a family cottage at Sherbrooke Lake that holds many cherished memories. He created machinery for his gravel pit including a screener that produced Class A gravel, and a front-end loader.  He also started the successful Cambridge Jam at the Cambridge Community Centre in October 2012; after five years he gave up the jam and went back to his roots of piping and became the official piper of the New Ross Canadian Legion #79 and piped at all their functions including their Remembrance Day Services.  He was a long-time hockey player and enjoyed archery at the Annapolis Valley Shooting Sports Club. He also shared the love of sailing with his wife, family and friends and often sailed in Mahone Bay. Of all he accomplished in his life there was nothing more precious to him than his family and he fought hard every day to stay with us as long as he could. He was loved very much and will be missed every day holding a special place in all our hearts.

Cremation has taken place. There will be no visitation. Private family prayers will be held in the White Family Funeral Home, Kentville. A webcasting of the prayer service will be available at 6:00 p.m. Wednesday, November 11, 2020 by visiting www.whitefamilyfuneralhome.com. A private family funeral Mass will be held in St. Joseph’s Roman Catholic Church, Kentville. A public graveside service will be held at 4:00 p.m. Thursday, November 12, 2020 in the Holy Cross Cemetery, Kentville, Father John MacPherson officiating. Please bring a chair if you wish to be seated during the graveside service.

Donations in memory may be made to the Holy Cross Cemetery, Kentville. Funeral arrangements have been entrusted to the White Family Funeral Home and Cremation Services, Kentville. On-line condolences and inquiries may be directed to www.whitefamilyfuneralhome.com.