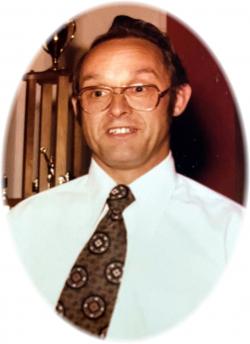 Ernest Richard "Ernie" King – age 83, of New Minas, formerly of Wolfville, passed away in Valley Regional Hospital, Kentville on November 14, 2020. Born May 21, 1937 in Wolfville, he was the son of the late Curtis and Helen (Dunham) King. Ernie enjoyed his childhood growing up in Medford. He played hockey in the Kings County League and badminton later on. He was a veteran of the Wolfville Volunteer Fire Department as well as service to the Kentville Volunteer Fire Department, acting as Captain of the Aerial Ladder Company in both departments. Ernie began his working life with Dominion Stores for 10 years and then owned the Wolfville Meat Market for 11 years. He then drove an 18-wheeler for the next 10 years for Midland Transport Limited. The family, for many years, enjoyed belonging to N.C.H.A and the local club, High Tide Drifters. After the family had grown up, Edith and Ernie spent many years as seasonal campers at Evangeline Beach. Ernie is survived by his wife of 61 years, Edith (Richards) King; two granddaughters, Kathleen (Nick) Betts, Edmonton, AB and Kimber King, Hamilton, Ont.; sisters, Minnie Crossman, Donna Marr; sister-in-law, Linda Lockhart; several nieces, nephews and cousins. In addition to his parents, Ernie was predeceased by his sons, Duane (2005) and Don (2017) and brother, Herbert. Ernie made his home for the past eight years at Evergreen Home for Special Care. There will be no visitation or funeral service, by request. A private interment will be held in the Elm Grove Cemetery, Steam Mill. A heartfelt thanks is extended to Dr. Jim Seaman and the staff of the Evergreen Nursing Home. Donations in memory may be made to Evergreen Home for Special Care - Bus Fund (655 Park Street, Kentville, NS B4N 3V7). Funeral arrangements have been entrusted to the White Family Funeral Home and Cremation Services, Kentville.