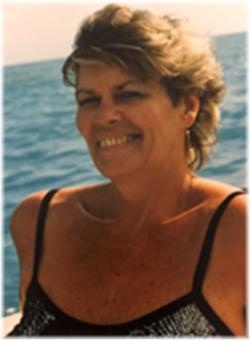 Carol Mae Sabean, 79, of Kentville, passed away at home on Tuesday, November 17, 2020 with her husband Frederick "Fred" Sabean by her side, after a courageous battle with cancer. Born in Falmouth, she was a daughter of the late Everett and Viola (Sabean) Woodman.

Carol was a smart, mature young lady growing up. She taught Sunday school, played piano and sang in church choir as a young teenager. She won the title of Valentine Queen in high school. She even helped her father, Everett Woodman, with snow plowing half of Falmouth for a few years. She performed very well with her first teenage job as an ice cream and soda jerk for a local drug store in Windsor. It was there she met and eventually married her husband, a young banker for Scotiabank. Bankers transferred around a lot back then, working in the three maritime provinces and met a lot of wonderful people along the way. Carol became a particularly good entertainment host for bank clientele, friends, and family. She loved to dance and play sports, holding her own in badminton, curling, bowling and golf. While in Summerside, PEI she learned to operate a snowmobile. Great winters over there! She modeled clothing for large department stores in Summerside and Halifax/Dartmouth. While in Summerside she joined and became president of the Y’sminettes Club, an affiliate of the YMCA. She took after her mother and grandmother with regards to cooking and sewing. Made a lot of her own clothes and had a little hobby shop making dolls and clothing in her spare time when not gardening or landscaping her various homes. Bank transfers eventually brought her to Dartmouth/Halifax where she put her abilities to the fore, becoming a sales rep for several national companies and winning trips to Mexico, the Bahamas, Niagara Falls, Quebec and Hawaii before going into retail operations. She became manager of "Tall Girl Clothing and Shoe" outlets in Mic Mac Mall and Halifax Shopping Centre. She found time to take a tour of Europe while her sister Janice and her husband were stationed with the Military in Germany in the early 1970’s. This trip was highlighted with visits to the Black Forest, the Alps and numerous other historical spots in at least seven countries. Carol especially enjoyed her numerous car drives, thinking nothing about jumping in the car while living in Kentville and driving to Shelburne for lunch and back. Also while working in the three maritime provinces we made it a policy to cover the most roads as possible. Tremendous sights and pleasure. Carol and her husband retired from banking in December 1993, moved to Kentville and enjoyed the beautiful Valley to the fullest before she was struck down with bone cancer in December 2019. Carol loved her family so very much, especially her grandchildren, Viola, Alisha and Alexander; and great-grandchildren, Rowan and Halona, whom she was just getting to know. Quite a woman! I’m indeed fortunate to have shared the major part of her life. Will never be forgotten!

In addition to her husband, grandchildren and great-grandchildren, Carol is survived by her sons, Steven (Uni), Jeffrey (Dawn) and Gregory (Janet); and sister, Janice. She was predeceased by her parents and brother, Harry.

Cremation has taken place. There will be a celebration of Carol’s life at a later date. The family would like to thank the Annapolis Valley VON and Palliative Care workers for all their wonderful care and support through this difficult time. Donations in memory may be made to a charity of one’s choice. Funeral arrangements have been entrusted to the White Family Funeral Home and Cremation Services, Kentville.

Click here to View Condolences
Visitation
There will be no visitation
Burial Date
At a Later Date
Burial Location
Centre Falmouth Cemetery, Falmouth
Requested Charity
Donations in memory may be made to a charity of one’s choice