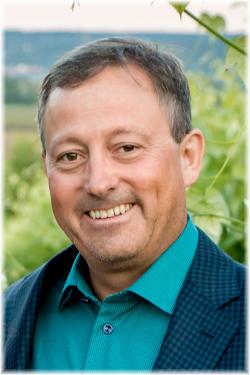 Darryl passed away peacefully at home on November 19, 2020 following a recent diagnosis of acute myeloid leukemia. He was 54. Born in Stratford, Ontario, on September 7, 1966, he was the son of Jean Brown (Heinbuch) and the late Clare Brown. He is survived by his wife Maureen Madigan and daughter Ella of Lower Canard, NS; mother Jean Brown of New Hamburg, Ontario; brother Bill (Wanda) Brown of East Zorra Tavistock, Ontario; sisters, Marilyn (Bob) Zehr of Tavistock, Ontario and Elaine (Ed) VanKlooster of Stratford, Ontario. Predeceased by his sister Gayleen and her husband Frank Crawford. Fondly remembered by his many nieces and nephews and their families.

Growing up on the family farm in Tavistock, Ontario, Darryl was grateful for a happy, healthy childhood. He studied Chemistry at the University of Waterloo and Queen’s University and along the way, he was rewarded with lifelong friends, most of whom refer to him as "D Brown." In 1993, he met Maureen. Theirs was a classic ‘90s romance – they fell in love watching Seinfeld on Thursday nights on cable TV at Darryl’s house. In the years that followed, they moved from Kingston to Halifax to Calgary, where Darryl worked in analytical chemistry and supported Maureen’s medical studies.

His life took on a new meaning when his daughter was born in 2002. He was fiercely devoted to Ella – of whom he frequently and not-so-humbly boasted – and they would build a special relationship over the next 18 years. In 2004, Darryl and his family settled in the Annapolis Valley, Nova Scotia where they bought land which he worked tirelessly to convert, with help from visiting extended family, into rows of grape vines that sloped towards the ocean. Black Dogs Vineyard would create beauty for all who visited and joy to those who drank the fruit of his labour. Darryl also enjoyed working with the Board of Directors of both the Grape Growers’ Association of Nova Scotia and the Kings County Squash Club.

Darryl had a unique outlook on life and never found it necessary to follow convention. His quick mind and sharp observational skills gifted him a clever wit. He was realistic, pragmatic and direct, always with a spirit of generosity. He quietly provided for others; you knew that he had your back. He made everything around him better: with Darryl a regular evening became an extraordinary dinner; a gathering of friends turned into a party; 28 acres on the Minas Basin was transformed into a vineyard. He was also a beautiful singer and skilled trumpet player. He listened to literary classics while tending his vines. There was no meal he could not cook, no tractor he could not fix. His curiosity, intelligence, generosity and sense of humour will live on in those he left behind, and most especially his daughter.

We give thanks for the tremendous support of family, friends and community as well as the countless medical professionals who cared for him. Darryl was humbled two weeks ago when forty people arrived to take the nets off his vines. We give special mention to Dr. Nebojsa Sparavalo, Dr. Sudeep Shivakumar and Nurse Jenn LeBlanc (VG hematology) and Dr. Mike Sinclair. To honour Darryl’s memory, please consider giving the gift of life by donating blood through Canadian Blood Services (1-888-236-6283). Alternatively, memorial donations may be made to the Valley Hospice Association.

Due to the increasing pandemic restrictions in NS, we are going to cancel the drop-in at the vineyard this Sunday and will hold it at a later date.

Funeral arrangements have been entrusted to the White Family Funeral Home and Cremation Services, Kentville. On-line condolences and inquiries may be directed to www.whitefamilyfuneralhome.com.