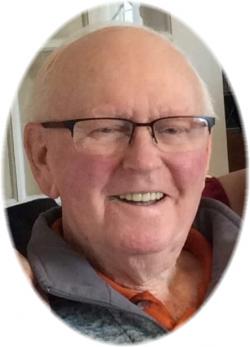 Our family mourns and celebrates this proud family man, Bob Bennett. He died on Monday evening, January 11, 2021 in the Valley Regional Hospital, Kentville, NS. He was born on March 16, 1940 in Glace Bay, NS, the son of Alexander Bennett and Mary A. (Roper) Bennett. At a young age, he developed an interest in livestock from being around his Scottish grandparents’ dairy farm. He became interested in veterinary medicine as his grandfather worked in the coal mines caring for the horses and cared for small and large animals in the community. At age 16, Bob went to the Nova Scotia Agricultural College, Truro, graduating in 1959 and then attended Ontario Agricultural College in Guelph, Ontario, graduating in 1961 with a BAS from the University of Toronto. He was on the OAC Livestock Judging Team at the Chicago Exposition and the Dairy Judging Team at the National Dairy Show in Waterloo, Iowa; both in 1960. He judged at many livestock exhibitions throughout Nova Scotia. Bob’s career with the NS Department of Agriculture and Marketing started as summer assistant for three summers. He began his career in 1961 as Assistant Agricultural Representative in Kings County; Agricultural Representative in Antigonish/Guysborough; Agricultural Representative in Hants County and Agricultural Representative in Kings County. In the mid 70’s he became Regional Agricultural Representative for Western NS, stationed at the Agricultural Centre in Kentville. He served a year as Manager of Assistance Programs before becoming Assistant Director of Extension Services, located at NSAC, Truro from where he retired in 1994. He loved working with farmers, staff and dairy cattle breeding (Holsteins). Professionally, he was a member of NS Institute of Agrologists and Agriculture Institute of Canada. Bob played hockey in college and was involved in coaching or managing hockey and baseball teams in Kentville when his sons were young players. He and Bunny were frequent fans of the Kentville Senior Wildcats baseball team. He loved sports; his passion being golf. He was a member of Ken-Wo Golf Club since 1961, while also being a member of Eagle Crest Golf Course for several years. Bob joined his friends most afternoons at 3:00 p.m. for coffee and conversation at Tim’s. He was so very proud of his sons and grandchildren, not only for sports or academics, but for just being good people. To say Bob was a real character would not be an exaggeration! He never forgot his Cape Breton roots and his Scottish heritage. Quite simply, he was a good person. Bob is survived by his wife of 57 years, Charlene "Bunny" (Simons) Bennett, Kentville, NS; sons, Geoff "Woody" (Monique), Kentville, NS and Sean, Kentville, NS; grandchildren, Mary, Halifax, NS; Mike, Kamloops, BC; Alex and Jack, Falmouth, NS; Willow, Ottawa, ON; Suann, Surin, Thailand; brothers, David, Whycocomagh, NS and Ross (Glenda), Reserve Mines, NS; additional family members, Supon "Sook" Bennett, Surin, Thailand; Heather Bennett, Falmouth, NS; Candace MacKay-Thomas and Link Thomas, Ottawa, ON. He was predeceased by his parents, infant brother, Paul, sister, Alexandra "Sandy" and son, Paul; sister-in-law, Claudine Bennett and a niece, Alexis Gillis. The family would like to thank the caring nurses and doctors on Medical B Unit, Valley Regional Hospital, in particular Dr. Broaders and Dr. Mulherin. Dr. Robert Gunn was Bob’s doctor for many years, and we are grateful for his care. There will be a private family graveside service and interment of ashes at a later date in the Oak Grove Cemetery, Kentville.  Donations in memory of Bob may be made to the Diabetes Canada (Nova Scotia) or VON Annapolis Valley. Funeral arrangements have been entrusted to the White Family Funeral Home and Cremation Services, Kentville.