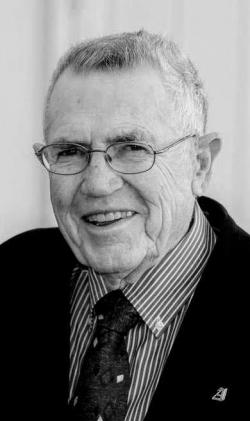 The family of Bryson Crowell are deeply saddened to announce his passing on January 11, 2021 in the Dartmouth General Hospital. Born in Port Williams, Nova Scotia on December 9, 1928, Bryson was the youngest child of the late Seth and Ethel Crowell (nee Bryson). While growing up in Amherst, Bryson met the love of his life, Gertrude "Trudy" (nee Silliker) to whom he was married for 68 years before her passing in 2018.

Bryson and Trudy started their life’s journey together at Acadia University where they spent four wonderful years building lifetime friendships and memories. Bryson arrived on campus in 1945 and for some time he was known as Kid Crowell. He was a seventeen-year-old who had arrived at the same time as Veterans returning from World War II, some of whom were nearly twice his age and were to become his sporting teammates. At Bryson’s induction into the Acadia Sports Hall of Fame, he was described as one of Acadia’s top male athletes of his era and he remained a great competitor throughout his lifetime. A standout on the rugby pitch, Bryson was a member of the Acadia team which won several Halifax City League and Nova Scotia intercollegiate titles during his four year stay with the Axemen. On the ice, Bryson played varsity hockey winning two Maritime championships and he wore the "C" during his final year.

In the summer of 1950, Bryson and Trudy married and moved to Springfield, Massachusetts, the first of their many adventures as a married couple.  Never a man to shy away from hard work, for two years he studied during the academic year and sold ice cream from a truck during the summer months. His graduation with a Master’s Degree in Physical Education coincided with a draft letter from the US Government, at which point he decided to head back to Canada. A two-year teaching career in Fredericton, NB, supplemented with door to door encyclopedia sales in the summer, led to a career in pharmaceutical sales when he so impressed one of his customers, an industry executive.

Family and sport made Bryson the happiest. He loved to talk about any sport, anytime, anywhere with anyone. His own athletic achievements continued throughout his life. An avid golfer, Bryson represented Nova Scotia five times on both the Willington Cup and Nova Scotia Teams. He was Nova Scotia’s Golfer of the Year in 1987 and twice a runner-up in the Canadian Senior Men’s Championship. Bryson remained an active golfer until the summer of 2019.  In his late eighties, Bryson regularly shot rounds in the 70’s! Bridge was his other sporting passion. From playing as a pastime in college, Bryson became a Life Master. He is well known in provincial bridge circles and he faithfully played every day online when meeting at the tables became an impossibility due to COVID-19. Above all, Bryson was extremely proud of his children, grandchildren and their accomplishments.

Bryson’s retirement took him and Trudy back to the Annapolis Valley, this time to Kentville where they continued to support their beloved Axemen, travel, spend time with family and friends, and summer at the cottage.

Special thanks to the many health professionals who provided excellent care and compassion to Bryson over the past few years.

Funeral arrangements have been entrusted to the White Family Funeral Home and Cremation Services, Kentville. Cremation has taken place and there will be no visitation.  A memorial service will take place on Monday, January 18, 2021 in St. James Anglican Church, Kentville and will be by invitation only due to COVID-19 restrictions. Reverend Shirley Cole officiating. A webcast of the service will be available on Tuesday, January 19, 2021 at 10:00 a.m. For on-line condolences and to view the webcast please visit: www.whitefamilyfuneralhome.com. Donations in memory may be made to the Valley Regional Hospital Foundation or the Dartmouth General Hospital Foundation.