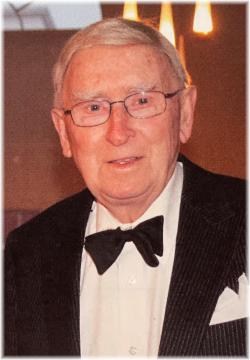 It is with sadness we announce the passing of "Al", a good friend and considered by many as an icon in the Town of Wolfville. Al passed away peacefully in Shannex Blomidon Court, Greenwich, with caregivers and special friends at his side. Born and raised in Port Elgin N.B., the youngest son of Albert and Hilda (Spence) Whittle. He was predeceased by both parents and sister-in-law, Barb. He is survived by brother, Willis Burton, nieces, Wanda and Patricia, and nephew, Warren. Al's life centered around the entertainment world of cinema, beginning in Amherst at the age of nineteen. From there he held positions at various cinemas from Charlottetown and Truro before permanently settling in Wolfville where he was employed by the F.G. Spencer Company of Saint John, N.B. At this time, he assisted with the management of the Capitol Theater in Middleton, but more notably, the manager of the Acadia Cinema until his retirement in 2000. During that time, he was also the box office manager for the Theatre Arts Festival International and President of the Apple Blossom Festival in 1971 and 1972. From 1960 to 2015, Al was also employed with Acadia University working primarily at Wheelock Dining Hall where he was fortunate to meet many lifelong friends, until his retirement at the age of 76. Special acknowledgement and thanks for the exceptional care and compassion he received from the staff of Shannex Blomidon Court during his last two years. Cremation has taken place and in keeping with Al's wishes, there will be no visitation or funeral service. Interment will be held at a later date in the Willowbank Cemetery, Wolfville. Donations in memory may be made to the Parkinson's Society or the Canadian Cancer Society. Arrangements have been entrusted to the White Family Funeral Home and Cremation Services, Kentville, where online condolences may be sent by visiting www.whitefuneralhome.com.