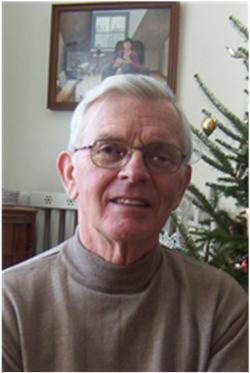 It is with sadness and much love that we announce the peaceful passing of a wonderful man, Fred Walsh.

Dad grew up in Halifax and attended LeMarchant St. School and later Rothesay Collegiate in New Brunswick. He entered NSAC and graduated from MacDonald College of McGill University in 1952 with a BSc. in Agriculture with a major in Horticulture. As a teenager he spent time working on farms in the Annapolis Valley or on his Grandfather’s dairy farm in Coverdale, New Brunswick. Upon graduation Dad moved to the Valley and purchased a farm in Rockland where he grew apples, pears, peaches and plums. He also grew gladiolas which he shipped all over Atlantic Canada as well as farmed hogs, laying hens and beef cattle. In 1954 he married Mary Mackay and they started their family of six children. In 1965, after the birth of their sixth child, and realizing Mary was just as fertile as the soil he nurtured, he installed a new furnace and there were no more children after that! Dad had worked off the farm with the Nova Scotia Department of Agriculture and Marketing, first as a Resource Development Officer from 1972-76 and later as an Agricultural Representative, before retiring in 1994. After his retirement from the Department of Agriculture, Dad spent much of time working in his gardens, advising his sons on their farming operations, and volunteering in the community. Dad had been a member of the Nova Scotia Fruit Growers Association since 1952 and had actively served in many capacities, including Director, Chairman of various committees, and President in 1997.

In addition to farming and working with the Nova Scotia Department of Agriculture, Dad devoted much time to many organizations, often in a major role, some of which are:

Dad received many awards including:

Dad’s lifetime of volunteerism culminated when he was recognized nationally with the Order of Canada in 2007. Aside from his many accomplishments, Dad was a kind, generous, and loving soul who possessed a wonderful sense of humor. The following is the essence of the man we knew, and if we’ve left anything out, we sincerely apologize to you Dad! His ornamental gardens in Rockland were his passion. He believed in planting shrubs, trees and flowers to celebrate marriages, births, and to honor peoples’ lives. He gave trees he had collected and nurtured from seedling to friends and families to celebrate their special events. These trees and shrubs were often meticulously labeled with plaques providing the important information of the variety or type, who or what it was for, and the dates. He enjoyed showing people around his property and sharing with them all the stories. Often some perennials or other plant material accompanied them home to start their own gardens. He would often volunteer to go with them and assist in the planting of their gardens. His gardens were the backdrop for numerous photographs of family and community events, marriages and reunions for over 50 years. His tireless work became the "Garden of Memories", inscribed on a bronze plaque mounted on a large granite rock, dedicated to his loving supportive wife and his 6 children. Ending with the phrase "A Gardener by The Grace of God" Dad was a man of great faith which was exemplified in many ways. He had a great knowledge of the Bible and he referred to it in times when he needed a little "boost". He attended the Berwick United Church where he was a member for over 60 years and held various positions. Over these years he was often asked to give the sermon, a request he thoroughly enjoyed because of his ability to effectively communicate his positive outlook on life. He attended many Cursillo gatherings sharing stories of faith and making many friends. He lived his life with grace, following Christian values. Dad had the gift of conversation and the personality and genuine interest that drew people from all walks of life into his circle. He was interested in people, finding out who they were, where they came from, what they did, and their interests. Usually after a brief conversation, Dad could relate that in fact, he knew your aunt, or your uncle, or brother or cousin twice removed! Not being born in the Annapolis Valley, he knew more about his neighbors’ ancestors, than they did themselves! In Dad’s role as an Agricultural Representative, he dealt with farmers on a daily basis and understood the realities of farming. He was able to inform them of new policies or grants available but more importantly, he was able to counsel those experiencing challenges in their farming operations. By times, he would bring home hitchhikers or people who were down on their luck for a meal or a safe place to sleep. This might be for a night or a fortnight, often offering them a job to give them a little money to continue on their journey. Later in life Dad faithfully visited local nursing homes because he knew that the residents appreciated the company. It was also common for Dad to deliver freshly cut flowers from his garden to family, friends, and visitors - just to brighten their day! He was active in the Elder-Hostel program at Acadia University acting as a tour guide. It was not uncommon for a large bus to appear unannounced in the driveway of the family farm. Fred was very proud that two of his sons and a grandson continue in the tree fruit industry. Throughout his life he instilled in his family his principles of unconditional love and acceptance of all. He was one of a kind and he always did things HIS way. Our entire Family would like to thank the staff at Grand View Manor, his home for the past six years, for the care he received. Also, the professionalism, care and compassion shown in his final days was exemplary. We will always be grateful.

Cremation has taken place and there will be no visitation, by request. Due to the COVID-19 pandemic and travel restrictions, a Celebration of Dad’s life will be held at a later date. Donations in memory may be made to Grand View Manor, Berwick, The CNIB or Berwick United Church. Arrangements have been entrusted to the White Family Funeral Home and Cremation Services, Kentville. On-line condolences and inquiries may be directed to www.whitefamilyfuneralhome.com.

This Too Will Pass
Weeping may endure for a night
but joy cometh in the morning.

Click here to View Condolences
Service Location
A celebration of Fred's life will be held at a later date.
Visitation
There will be no visitation, by request.
Requested Charity
Grand View Manor, Berwick, The CNIB or Berwick United Church