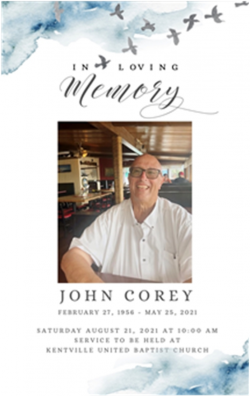 The family of John David Corey, of New Minas, NS, are heartbroken to announce his sudden passing during the early morning hours of May 25, 2021 in the Valley Regional Hospital, Kentville, NS.

He was born on February 27, 1956 in Kentville and was one of four sons of the late Vernon and Jean (Palmeter) Corey. John grew up on Leverett Avenue, in a home right by the tracks, where he delighted in watching and listening, as the trains went by. His love of trains came from his Dad, an Engineer for the Dominion Atlantic Railway. During his early teenage years, John enjoyed washing all the different vehicles at H.C. Lindsay Funeral Home and learning about the funeral home business. He also enjoyed playing hockey throughout the years, as a goalie, starting out with the Kentville Wildcats, then playing for the Randsland Broccoli, and later for the Old Timers League, in Canning. Oh, how he loved to share those memories and reminisce on the days of tournaments and road trips spent with his team, particularly one trip the team took to Quebec.

John spent his schooling years in the Valley, starting out at the Kings County Academy, his senior years at Horton District High School, and later attending vocational school at Kingstec for paramedic studies. John met Wanda during high school, and she was most definitely the apple of his eye. Every week he would bring flowers to her doorstep and once again ask her on a date. Playing hard to get, she later realized the undeniable gem that he was. They married in 1982, when John became a loving stepdad to Alicia, and in 1983 they completed their family of four, when Jonathan was born.

John was eager to start working at an early age, spending many years as an ambulance driver for Lindsay’s. He loved that job and still regularly told stories about being a paramedic in the good ol’ days. Years later, he moved on to start a new path, working for Napa Auto Parts. Leveraging his strong relationships in the community, he was regularly sought out for assistance, bringing much business over the years he worked there. Devoted and faithful, he worked early mornings, and late nights at multiple locations. He was so proud of his work and how he served them for so long, finishing with 35 years.

John was an involved Dad, and so proud of his kids. He loved spending time with his family around the home: mowing the lawn, tending to the gardens, doing home improvements and really took pride in the family life they had together. For vacation, they loved to camp at Graves Island, in Chester, and took many day trips to the family property, Sea Edge, at the shore. There, they enjoyed barbeques, bon fires, and helping out with whatever was being worked on at the time. He loved to help his father-in-law Chet, building the shop, the cottage, and landscaping the property, bringing down trees and burning. He selflessly never asked for a thing in return. He was so content to work alongside friends and family, bringing such joy and laughter, everywhere he went. Sea Edge later became a place of solitude and renewal for him – he loved to listen to the peepers by the pond, swing in the hammock, walk to the shore and watch the sunsets. At home, he loved walking his dog Angel, plowing the driveway, washing his car, and puttering around.

John and Wanda were active members in their community, both dedicated in everything that they did. John volunteered with the Village of New Minas, helped raise money for cancer and the church, and was very social. Everywhere he went, John brought with him a warm presence and luminous smile. The twinkle in his eye, his infectious smile and laugh were one of kind! He made others feel appreciated and valued in the humblest of ways. Genuine in every way, he radiated love and gave the best hugs! No one knew this more than those that received an invitation to one of John and Wanda’s get togethers. From family celebrations, Super Bowl parties, Napa staff parties, to hockey night hang outs (go Leafs!), John was right in his glory – loving to entertain and sharing in friendship and fellowship with others.

John and Wanda steadily grew their faith together, being baptized together in Lumsden Dam by Rev. Fran Woodside and joining a wonderful and supportive church community, at the Kentville United Baptist Church. Later becoming members of the church choir, John loved and very much looked forward to their concerts and sing songs with other church choirs. Together, they enjoyed church retreats, events, and time spent with their fellow church members. John often talked of the love and support he received from this community. At no other time, was his love and faith more evident, than during the years he spent devoted to caring for Wanda, throughout her journey with dementia. On the many trips he took to Lunenburg, where she later resided, he always greeted the staff with a smile, asking how they were doing - always putting others before himself. He regularly brought them Stirling’s honeycrisp apples, as a treat, showing appreciation for their work even in the simplest of ways. John’s kindness was also seen in his tradition of bringing bouquets of roses, to all the ladies in the choir, every Valentine’s Day. Despite his own grief, due to the continuing loss of Wanda, his connection with others was always felt – during time he spent with his Dementia support group, the Monday night suppers of spaghetti at Joe’s, and Timmy’s coffee nights in Kentville, were cherished memories for him.

After Wanda’s death, John found much needed companionship and new love in a dear friend, Mary Lou. They spent many days together, going for drives, exploring our beautiful province, taking his first trip to the Caribbean, and social nights at the block party in her neighbourhood. He made many dear friends, during this time. He was so looking forward to summer post-COVID and all the adventures they would have together.

Our family would like to thank the caring staff at Valley Regional Hospital and White Family Funeral Home, in Kentville for assistance during this difficult time.

A funeral and memorial service will be held on Saturday, August 21, 2021. Details to follow. The family ask that you please pay it forward, in John’s name, by doing an act of kindness and taking time to appreciate others. Arrangements have been entrusted to White Family Funeral Home, Kentville, NS. 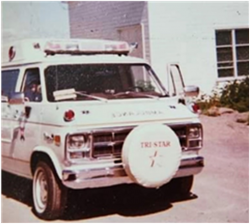