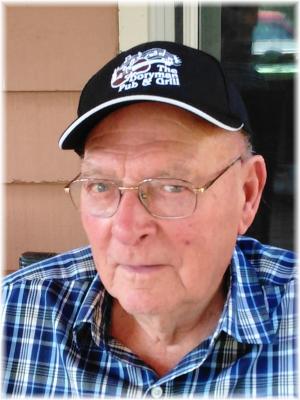 Wesley Gordon MacBride, 93, Canning, NS. It is with heavy hearts that we announce the passing of our father. Wesley, or "Wet" as many knew him, was born in Pereaux, NS on February 27, 1928. Second oldest son of James MacBride and Edna Greene. A man who valued home, family, dignity, health and serenity, he passed away peacefully at his home, with family by his side on May 31, 2021.

As a young man, Wet worked in the winter lumber camps on Cape Blomidon and in Musquodoboit returning in the spring to work on his Uncle Wilf’s farm, which included planting apple trees that grace many postcards of the Annapolis Valley - The red barn with the round roof surrounded by apple blossoms. For several years he was employed at Sinnett’s Grocery Store and operated the Esso garage in Canning.

On two occasions he drove with his cousin, Earle Crowe, and brother, Elmer to Taber, Alberta where they were employed during the harvest of sugar beets. This was a great adventure for these young lads. They may not have made a lot of money, but they sure made a lot of memories.

He supported his family working 32 years for Co-op Atlantic Feed Division driving a bulk feed truck. In this time, he developed friendships with many farmers across Nova Scotia and Newfoundland. His truck of choice was always a MACK as it always got him home safely through many snowstorms and icy roads. In 1974, he was honored by the NS Highways Safety Council for one million miles of accident-free driving. The distance is equivalent to forty trips around the earth. He continued to add to the total until his retirement in 1992.
Wesley served his country by enlisting in the West NS Regiment 2nd Battalion in Camp Aldershot, NS during the 2nd WW, and his community as a volunteer Fire Fighter in Canning for 21 years from 1961-1981.

He will be remembered for his independence, kindness and low-key sense of humor that was usually a one liner.

The family would like to thank Dr. Susan Hergett who provided exceptional care to him and the family, Victoria Order of Nursing whose service made it possible for him to stay in his home during his short illness. Many thanks to family, friends and neighbours who reached out with caring words and condolences.

In keeping with Dad’s wishes he has been cremated and arrangements have been entrusted under the care of White’s Family Funeral Home and Cremation Services in Kentville. Due to COVID-19 there will be a private family service at a later date. Donations can be made to the VON, SPCA or a charity of your choice.

Click here to View Condolences
Service Location
A private family service will be held at a later date.
Requested Charity
VON, SPCA or a charity of your choice