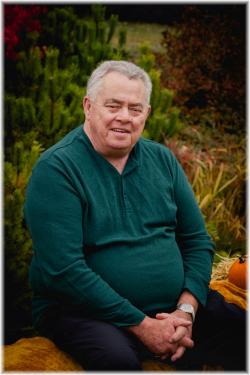 Richard "Rick" Cleveland, 70, of Kentville, passed away on Sunday July 4, 2021, with his family by his side, after a short battle with cancer.

Rick was born in October of 1950 in Kentville. Rick was known for his athleticism during his school years. He played many sports in school but was particularly known for his skills in basketball but was sidelined from pursuing it at a college level because of a knee injury.

After school, he worked many jobs before he finally landed in the job he would have for the rest of his career. He was a dedicated salesman for Canada Bread Atlantic (Ben’s) until retirement after 24 years. In 1969, he met Linda, and they wed in November of 1970. They recently celebrated a huge milestone of their 50th anniversary. They completed their family with the addition of a daughter, Cheri, a couple years after marriage.

Rick was a force of nature, determined to provide for his family and give them the life he felt they deserved. His family meant more to him than anything else in the world, something he often mentioned. He was unendingly proud of Cheri, and Linda and always tried his best to support them. He was most proud of his wife and the sacrifice she made to stay home to focus on the job of raising their child. He was especially proud of Cheri’s commitment to post graduate schooling as a Respiratory Therapist and her commitment to her patients.

Rick was also passionate about baseball and in his 20-30’s could often be found playing ball when he wasn’t at work. He was a pitcher for many slow pitch and fast ball teams. He made a lot of lifelong friendships.

Rick was also passionate about helping those in his community. He volunteered for the Citizens Patrol with the RCMP for many years and volunteered to coach the boys baseball team in Coldbrook during his nephews teen years.

Anyone who knew Rick knew that he was the most loving father and husband a family could ask for. Rick was predeceased by his parents, William and Lillian Cleveland; brothers, David and Harold; sister, Wendy; mother-in-law, Margaret Mailman and father-in-law, Merville "Ace" Mailman as well as sister-in-law, Bonnie Mailman.

He is survived by his wife of 50 years, Linda (Mailman); daughter, Cheri (Blake) Davison; sister, Debbie; brother, Brian; several brothers and sisters-in-law, Donnie Mailman, Brenda Salsman, Doug and Donna Mailman, Brian and Cheryll Burke; as well as his much loved nieces and nephews.

The family wishes to thank Dr. Rob Gunn, special family friend Linda Turner, the Palliative Care team, as well as special care givers. Gena, Melinda, Sheri, and Abigail, your care and support especially during the last months have made such a difference.

Due to COVID-19 pandemic regulations, a private funeral service will be held in the White Family Funeral Home, Kentville, Reverend Gary Manthorne officiating. Burial will take place in the Elm Grove Cemetery, Steam Mill. A video webcast of the service will be available at 2:00 p.m., Tuesday, July 13, 2021.

Donations in memory may be made to the Beave Fund – in support of youth (Kentville Minor Baseball).

Funeral arrangements have been entrusted to the White Family Funeral Home and Cremation Services, Kentville. For online condolences, inquiries and to view a webcast of the service, please visit www.whitefamilyfuneralhome.com.