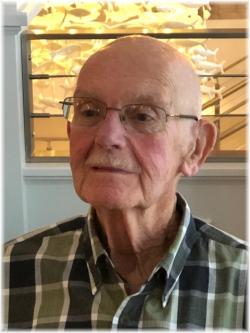 Timothy Arthur Stephen Ruggles "Tim" Johnston, of New Minas, passed away on Thursday, July 8, 2021, in his 88th year. Tim passed away peacefully, surrounded with the love of his family. Born in Halifax, Tim lived an exciting and full life. He was active in sports from a very young age and that competitive nature stayed with him well into his 80’s. His love of sports cars, golfing his age, maintaining a pristine yard, and having the latest and greatest gadgets were just a few of his passions. Tim began his working career with the Royal Bank where he met his wife, Barbara. Later, he moved to the insurance industry where he spent most of his career with Traveler’s Insurance. He made many friends when he was "on the road" all over the Maritimes. Tim was an avid hunter and fisherman. Over his lifetime, he hunted and fished all over Canada. His favourite trips were the yearly ones on the Miramichi with his fishing buddies. Great food and good times were always in the report when he returned home. He and Barb loved to travel and made many trips to so many places. For 30 years, they wintered in Florida with their many snowbird friends and golfing pals. Tim is survived by his wife, Barbara (Elliott), of 65 years; daughters, Karen (Neil) Veinot and Susan (Terry) Bryski; his grandchildren who are left with many fond memories, Nick (Kimi) Veinot, Mike (Jen) Veinot, Grace (Terran) Stoddart, David (Cait) Stoddart; great grandchildren, Adam, Eric and CeCe Veinot; step-grandchildren, Natasha Hamelin, Latoya Waters and their families. He was predeceased by his parents, Dr. Stephen and Mrs. Lilian Johnston; son, Robert; brother, Derek and sister-in-law, Betty. Thank you to special friend Helen, Dr. Sinclair, the amazing staff at Valley Regional Hospital, and our angels at Grand View Manor, who all joined "Team Johnston" in ensuring that Dad lived his best life. Cremation has taken place and there will be a private family graveside service at a later date. Donations in Tim’s memory can be made to Valley Regional Hospital Foundation CT for Life or Feed Nova Scotia.