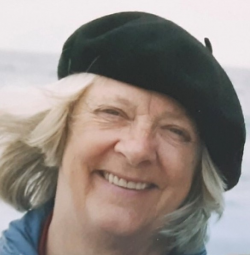 Barbara Elizabeth (Fletcher) MacKay – age 85, of Wolfville, passed away on Friday, July 16, 2021. Born in Sault Ste Marie, Ont., she was the daughter of the late Gordon and Ethel (Radford) Fletcher and wife of the late W. Donald MacKay.

Born January 2, 1936, Barbara lived the first six years of her life at the Abitibi logging communities of Magpie Junction and the Herrick Depot. There, with the assistance of her mother, she learned to read and write from school lessons the government sent up on the Algoma Central Railway train. Those early childhood experiences instilled in her a creative curiosity which allowed her to investigate all the magical inspirations she found in her life. Barbara always treasured her northern Ontario heritage and she made a point of returning to those beginnings every year.

Barbara’s playful, adventurous spirit captured the hearts of everyone she met. Theatre was her passion. Her award-winning acting experiences with the Sault Theatre Workshop in the 1950s, combined with a teaching career that began in the Sault’s grade five classroom at F.H. Clergue to Sir James Dunn High School, led her to expand her horizons. In the 1960s, Barbara moved to London, England, to teach school. In the 1970s, she and Don moved to Montreal where she became a drama professor at Concordia University. After retirement, Barbara and Don settled in Ireland for a few years before returning to Canada, making Wolfville, Nova Scotia, their final resting place.

Barbara is survived by her stepdaughters, Marina, and Karen; her sisters, Karen Bishop, Noella Depew, Ruth Fletcher; her late brother, John Fletcher; sister-in-law, Pegi Fletcher; grandchildren, Sian and Matthew Lewis; beloved aunt of Geoff, Paula, John Paul, Anne Marie, Gregor, Fletcher, James, Celia and John and a dear friend to our many cousins. In addition to her parents, she was predeceased by her devoted husband, W. Donald MacKay.

A special thank you to Kate Farris and her superb, empathetic care team in Wolfville, Nova Scotia. They gave such loving attention to Barbara and they made her part of their families when COVID prevented us from being there.

Cremation has taken place. Due to the COVID-19 pandemic and travel restrictions, a memorial service will be held at a later date. Interment will take place in Lower Horton Cemetery, Grand Pre, Nova Scotia. Donations in Barbara’s memory may be made to the charity of your choice. Funeral arrangements have been entrusted to the White Family Funeral Home and Cremation Services, Kentville, NS. On-line condolences and inquiries may be directed to www.whitefamilyfuneralhome.com.