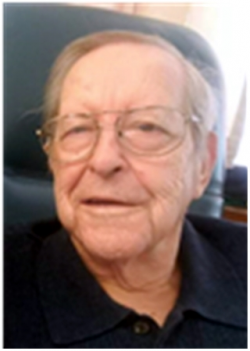 James Robert "Bob" Clark - born on October 8, 1932, passed away on Thursday, July 22 2021 in the Hants Community Hospital, Windsor. Born at the family homestead in Clarksville, Bob was the youngest of five boys. Predeceased by brothers, Harold, John, Grant, and Ralph, Bob is survived by wife, Pauline (Wells); daughter, Kathleen; son-in-law, Daniel Leslie; grandchildren, Christopher (wife, Dezirah Skochylas), Ashleen (husband, Chris Faller) and Nicholas (partner, Danielle Roach); plus great-grandchildren, Jocelyn and Lara Faller. Bob moved to Rawdon with his mother Elsie and attended Rawdon School where he completed Grade 11. At age 17 he began working for the Dominion Atlantic Railway in Windsor where he met his future bride. They married in 1956 and moved to Waterville, Kings County where Bob held the position of Station Agent. In 1958, daughter, Kathleen was born and Bob and Polly were living in Hantsport. The position of Station Agent in Brooklyn, Hants County allowed the family to move back to the Clark family homestead in 1960. When the Brooklyn station closed, Bob and family moved to Kentville in 1971 where Bob held the position of Operator until he took early retirement in 1987. They moved back to the homestead in Clarksville in 1989. Bob and Polly enjoyed winters in Florida from 1991 through 2003 when a spring tornado delayed their departure from Orlando airport and Bob vowed he'd never fly again. Gardening and mowing lawns kept Bob busy for three seasons a year and winters were spent with odd chores and plenty of TV watching. Declining health in 2020 meant he could no longer work in his garden and by May 2021 he was admitted to hospital where he spent his final days. Many thanks to the staff of the Valley Regional Hospital, Kentville Emergency Department and Hants Community Hospital units 200 and 500 who did their best to keep him comfortable and a special thank you to Nurse Theresa for her many songs and special friendship. As per Bob's wishes, no funeral will be held. Cremation has already taken place and a committal service for family will be held in Saint Stephen's Anglican Church in Stanley at 2:00 p.m. on Saturday, August 28, 2021. Following the committal, a reception for friends and family will be held in Stanley Hall. Donations in memory may be made to Saint Stephen's or charity of choice. Arrangements have been entrusted to the White Family Funeral Home and Cremation Services, Kentville.