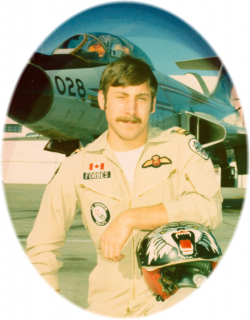 James Michael "Jim" Forbes, age 62. We are heartbroken to announce the passing of our dear brother, loving son and devoted uncle. On August 24, 2021, Jim lost his valiant battle against COVID-19 in the ICU of the Valley Regional Hospital, Kentville. He is lovingly remembered by his mother, Mary Josephine "Jo" Forbes (Chisholm) Kentville, NS; his brothers, John, Port Williams, NS; George (Brenda), Camrose, Alberta; sister, Joann Forbes, Coldbrook, NS; former brother-in-law, Don Urquhart, Tupper Lake, NS; his beloved nephew, Alexander (Kati Kaufman) Forbes, Waverly NS; and the love of his life, Eve Gordon. He was predeceased by his father, William Forbes.  Always an intellect with a quick wit and charm, Jim graduated from South Colchester High School in 1977 having won the Lieutenant Governor General's medal in Grade 11 and upon graduation gave the Valedictorian speech. After a year at Saint Mary's University, Jim joined the Canadian Forces in 1979. His father's proudest moment was getting to pin his navigator's wing on him after the completion of his basic air navigation training course.  Some of Jim's happiest memories were when he joined Squadron 416 and became a navigator with the CF-101 Voodoo's.  Jim served with the Canadian Air Forces at various CFB bases in the Maritimes and BC, obtaining the rank of Captain before retiring in 1988. After leaving the military, Jim explored other adventures but returned to the world of flight with Nav Canada as a special flight services specialist in 1994 serving in several BC communities. After retiring he moved to Kelowna, BC, to be closer to his brother, John, where they had many memorable days.  The most joyous of these adventures was when they travelled to Scotland to celebrate Jim's 60th with their nephew Alexander.  Jim and John's last great adventure was to move home to be closer to their family and start a new chapter of fun.  Unfortunately, Jim's plans were interrupted by COVID and he and his beloved Eve never got the chance to explore the promises of this province together. Let not our sorrow diminish the joy and laughter Jim brought into this world. There will be no visitation or funeral service by family request.  Cremation has taken place and an online memorial service will be available at a later date. Donations in memory may be made to Valley Regional Hospital - ICU. Arrangements have been entrusted to the White Family Funeral Home and Cremation Services, Kentville.