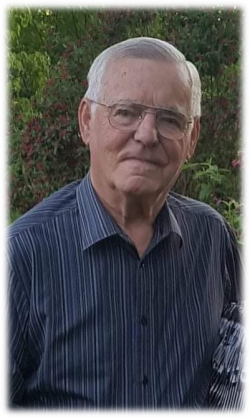 Joe Gezinus Gerrits – 87, formerly of Canaan, passed away in Valley Hospice, Kentville on Friday, September 3, 2021. Born in Hardenberg, The Netherlands, he was a son of the late Berend Jan and Johanna (Marsman) Gerrits.

If you were ever lucky enough to meet Opa you knew just how much he loved his family.  There would often be times as kids when we would visit and Opa would be excited to show us the new toy he had finished "down cellar". He would be quick to joke when you would steal his chair but was also quick to invite you to sit on his lap and join him after.  He was always quick to fix anything broken or make his own improvements even if it wasn’t. He had such an inventive and creative mind.

Born October 11, 1933, into a lineage of farmers, Pa demonstrated at an early age that he was cut from a different cloth.  His curiosity and abilities steered him to pursue his passion for the mechanical. As a youngster he would dismantle and examine the few mechanically driven items on the farm, to see how they worked. Pa emigrated to Canada in 1953, along with his parents and siblings. In 1957 he married his Dutch Sweetheart, Janny Zweers, who had followed her heart to Canada in 1955.

Respectful of his Dutch heritage, he felt proud and privileged to call himself Canadian; a sentiment his children and grandchildren share. Highly skilled and respected as an automotive mechanic, he opened his own repair shop in 1964. He operated his business for over 30 years.  He also had abilities as a machinist and woodworker.  His hands were seldom idle.

A man of Christian faith, he led his family by clear and consistent example, more powerful than words. He strove to instill in his family the principles of love, compassion, forgiveness, respect, the value of an honest day’s work and taking responsibility for ourselves and others. We are blessed by his loving guidance. Pa was actively involved in the Kentville Christian Reformed Church, as a long-time member of the choir and serving in several leadership positions. He also contributed to the establishment and maintaining of the Kings County Christian School. After retirement, he volunteered at the local foodbank, soup kitchen and Meals on Wheels program.

As his children, we were encouraged to pursue our dreams and aspirations, as he did. Thank you, Pa, we feel blessed and privileged to call you our Pa.

Pa was taken home to be with his Lord at his appointed time.  Pa’s favourite Psalm is 42, the chorus of which is:

Why are you downcast, O my soul?

Why so disturbed within me?

Put your hope in God, for I will yet praise Him,

my Savior and my God.

We are assured that his soul is no longer downcast or disturbed as he is now at peace in the presence of our Savior and God.

Visitation was held on Saturday, September 11, 2021. The funeral service will be held at 3:00 p.m. on Saturday, October 9, 2021 in Kings Presbyterian Church, New Minas, followed by a reception. A video webcast of the service will be available on Sunday, October 10. Private family interment will take place in Canard Burial Grounds, Upper Canard. Donations in memory may be made to Valley Hospice Foundation or VON Canada. Funeral arrangements have been entrusted to the White Family Funeral Home and Cremation Services, Kentville. To view the video webcast and for on-line condolences please visit: www.whitefamilyfuneralhome.com.