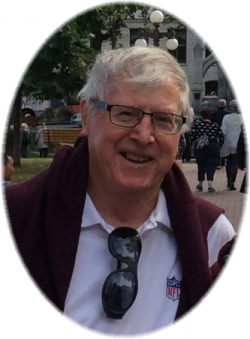 Bill passed away in the Valley Regional Hospital, Kentville, after a brief illness.

He is survived by his wife, Jill; sister, Margaret, of Swansea, Wales; son, David (Sara) of Nottingham, England; daughter, Rebecca (Pietro) Onorati of Hickling, England; granddaughters, Laura (Luke) Onorati-Proctor and Ellie Wagstaff; great-granddaughter, Louisa; several nieces and nephews in Swansea. He was predeceased by his daughter, Debra; sisters, Dorothy and Anne; brothers, Jack and Leonard. He was so proud of his children’s and granddaughters’ accomplishments, and was looking forward to meeting Louisa for the first time.

Bill was born in Swansea and attended Dynevor Secondary Grammar School, finishing as one of the school prefects. It was at Dynevor he discovered his love for and skill at soccer, playing semi-professionally for several local teams on the weekends. After grammar school, he went on to the University of Swansea, graduating with honours in History and Economics, and then earning a Bachelor of Education. He played with the university soccer team, and was chosen to be a member of the British team at the first World University Games. He scored on a penalty shot in the final game, and helped Britain win the silver medal. He also played with the Swansea City Swans while at university, and Nottingham Forest while teaching at Loughborough and Nottingham.

In 1969, Bill immigrated to Canada to take a teaching position at West Kings District High School in Auburn, where he eventually met Jill, and stayed until his retirement in 1995. He taught several courses over the years, but his love was Senior English. He inspired and mentored hundreds of students; produced many West Kings musicals and plays; and coached school soccer, table tennis and Reach for the Top teams.

Outside of school, he coached the Valley Bulldogs Rugby Club for several years, guiding them to the Maritime Division B Championship in 1995. He loved the camaraderie of the rugby boys, and took many of the Bulldogs and other members of the Nova Scotia rugby community on three tours of Wales. He also served on the Board of Directors of Rugby Nova Scotia. In the 1970’s and 1980’s, he helped to establish soccer in the Annapolis Valley. Later, he was one of the founders of the Acadia Axemen Supporters group, whose purpose was to ensure that a men’s varsity soccer team continued to exist at Acadia. He also helped to organize the Gunn Baldursson Memorial Soccer Tournament for several years.

While teaching at West Kings, he became deeply involved in the NSTU, serving as local president several times, sitting on many provincial committees, and acting as a contract negotiator. He worked very hard on behalf of teachers, helping to improve salary scales and working conditions. This dedication continued after retirement when he served on the Provincial Executive of the Retired Teachers Organization.

Bill was a voracious reader, often having two or three books on the go at once. He read many types of books, but among his favourites were history and British and Scandinavian crime fiction. He was a gifted story teller, a talented cook, an excellent tennis player, and a skilled Sudoku solver. He was kind and generous, and had a wicked sense of humour, delighting in playing practical jokes on unsuspecting victims. He enjoyed travel and, after her retirement, he and Jill discovered a love for cruises. He was very fond of music, especially Welsh choirs, Italian opera and Broadway show tunes; although, unusually for a Welshman, he couldn’t carry a tune. Although he eventually became a Canadian citizen, he never lost his love for Wales.

Cremation has taken place and, according to Bill’s wishes, there will be no funeral or memorial service. Instead, there will be a get-together at the Kings Arms Pub in Kentville, on Saturday, October 23, 2021 from 2 to 4 p.m. Bill spent many happy hours at the pub, playing cards and darts, watching Premier League and NFL games, and analyzing the world’s problems. Donations may be made to the SPCA or to the Annapolis Valley Regional Library. Arrangements have been entrusted to the White Family Funeral Home and Cremation Services, Kentville. Online condolences and inquiries may be directed to www.whitefamilyfuneralhome.com.

Click here to View Condolences
Service Date
Saturday, October 23, 2021
Service Time
2-4 p.m.
Service Location
A get-together will be held at the Kings Arms Pub, Kentville.
Visitation
There will be no visitation, by request.
Requested Charity
SPCA or the Annapolis Valley Regional Library