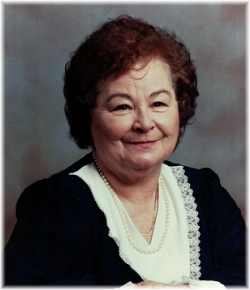 E. Joan Balcom – 85, of South Berwick, passed away on Thursday, September 30, 2021 in Orchard Villa West, Berwick. Born in Berwick, she was a daughter of the late Raymond and Esther (Keddy) Chute.

Joan was a well-known businesswoman in the Annapolis Valley. She grew up on a mixed family fruit farm, she was a long-time member of Christ Anglican Church, Berwick, and a much loved and respected life-long Berwick resident. Joan had a love for all animals, especially her dog, Charlie. Joan owned and operated the successful Joan's Handcrafts on Highway 1, South Berwick, from 1959 to 1975, featuring local artists and crafts persons works. She was a talented writer and photographer and put these talents to work by writing for several local magazine publications. From 1965 to 1972, Joan was a reporter for the Chronicle Herald, reporting on worthy events and people throughout the Annapolis Valley. At the age of 30, Joan published her first book called Ripe & Ready, a correlation of apple recipes. This publication was printed in 1966, 1991, and again in 2003. She also wrote and published three books based on local folklore. It was in 1975 that Joan began practicing real estate, a career that spanned over 35 years. During this, she founded Joan Balcom Real Estate, as well as consistently earning top sales awards for a few other brokers within the Valley; retiring from the industry in 2010. It was in 1978 that Joan invested in her first rental property and since that time purchased, sold, and developed 20-plus income properties, providing affordable housing to many. Joan had a lifelong affair with the Bay of Fundy. Owning a cottage, spending her summers there and being part of the Harbourville community. She never missed a chance to get out on the water with her fishermen friends.

Cremation has taken place and there will be no visitation, by request. Due to COVID-19 pandemic restrictions services will be held at a future date. Donations in memory may be made to the Berwick Cemetery. Cremation arrangements have been entrusted to the White Family Funeral Home and Cremation Services, Kentville.