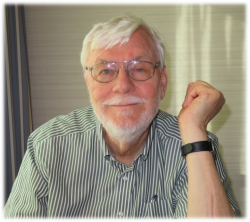 Patrick Terence Hugh O’Neill died peacefully at the Valley Hospice on October 1, 2021. Pat was born in Vancouver on March 25, 1942. He was raised by his mother, Catherine, with help from other relatives, when his father did not return to Canada after the Second World War. Pat spent his childhood in Vancouver, Whitehorse Yukon, and Vanderhoof BC.

He left school early to become a radio announcer on CFWH in Whitehorse, then for CBC Northern Services. The job ended when the CBC discovered that he was underage. He worked as a newsman on various private stations in BC: CJAT in Trail, CKOV in Kelowna, CFCP in Courtenay, CHUB in Nanaimo. His most memorable experience was working with the legendary Jack Webster in the newsroom of CKLG in North Vancouver. He switched to print media in the 1960s, working as reporter and then as Island Editor of what was then the Daily Colonist in Victoria.

He was an actor, director, and playwright in Victoria. His plays were produced by Bastion Theatre, and four were featured on the CBC – three on television and one, The Great Canadian Preface, on national radio.

Pat switched careers in 1967, becoming a childcare worker at Sevenoaks Children’s Centre. This led him, in 1969, to go back to school to train as a psychologist. He completed his B.A. (Honours) at the University of Victoria, and went to Yale University for his M.S. and Ph.D. He specialized in community-clinical psychology and was attached to the Psychoeducational Clinic while at Yale. He did a clinical internship at Illinois State Psychiatric Institute in Chicago.

Pat came back to Canada to join the psychology department at Acadia University in 1974. He worked there for 29 years before taking early retirement and becoming professor emeritus. Pat was the Chief Negotiator for the Acadia University Faculty Association (AUFA) on the first Collective Agreement. He remained active in union affairs, serving on four other negotiating teams for AUFA. He was also the Vice-President of Local 3912 Canadian Union of Public Employees from 2018 – 2020. He was a member and then Chair of the Academic Freedom and Tenure Committee of the Canadian Association of University Teachers (CAUT) for most of the 1990s. He was an Adjunct Professor at Dalhousie University, taught Ethical Decision-Making in Psychology at Dalhousie University, at Mount Saint Vincent University and at the University of Alberta.

Pat was also active in the profession of psychology. He was the Chair of the Nova Scotia Board of Examiners in Psychology (NSBEP), Editor of Canadian Psychology, President of the Canadian Psychological Association, Executive Director of the Canadian Council of Chairs of Psychology Departments and Nova Scotia representative to the governing Council of the American Psychological Association (APA). He was on APA Council during the controversy over psychologists participating at Guantanamo Bay; Pat joined those who took a strong stand against such activities. He was the 2021 recipient of the APNS Dr. Charles J. A. Hayes Lifetime Contribution Award for outstanding service to the discipline and profession of Psychology provincially, nationally, and internationally.

His primary research interests were in Community Psychology and Ethical Decision-Making. He was the author of Negotiating Consent in Psychotherapy (N.Y. University Press) and, with Ed Trickett, Community Consultation (Jossey-Bass). He was a member of the Federal government’s Interagency Panel on Research Ethics (PRE).

In addition to his professional activities, Pat also loved attending live opera and other performing arts. He enjoyed testing his eclectic knowledge by watching episodes of Jeopardy, testing theories of game psychology by playing poker with friends, accompanying his partner Janice on her annual research trips to Paris, and following the careers of his children and grandchildren both from close by and from afar.

Pat leaves behind his loving family, including his partner of over 30 years, Janice Best and three children, Terry (Gail), Seanna (Mark), and Chris (Ken). He was a proud grandfather of seven grandchildren, Teri, Meaghan, Kirstin, Hugh, Aliah, Eamonn, and Malachy, and of five great-grandchildren, Dominick, Dylan, Grace, Patrick, and Maxine. He will be missed terribly.

Donations in Pat’s name to a favourite charity in lieu of flowers would be appreciated. A celebration of Pat’s life will be held on Sunday, April 24, 2022 from 2:00 - 4:00 p.m. at the 'Great Hall' in the Fountain Commons, Acadia University. Funeral arrangements have been entrusted to the White Family Funeral Home and Cremation Services, Kentville. On-line condolences and inquiries may be directed to www.whitefamilyfuneralhome.com.