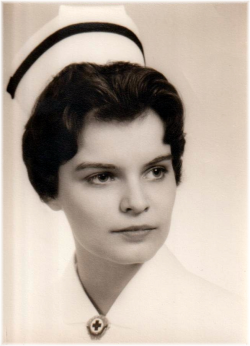 Our Joanie gained her freedom peacefully, on September 29, 2021, in the Valley Regional Hospital with her loving husband by her side. Born in Toronto, October 4, 1942, she was a daughter of the late Phyllis and Bev Porter. After graduating from Woodstock General Hospital, she worked as a pediatric nurse at Sick Kids in Toronto, and for a time in geriatrics in England. Later in life, along with her husband, she ran The Bay News, a community newspaper in St. Margarets Bay, as well as teaching pre-school. She never missed driving her son, Jason, to all his ball games and tournaments, and she was his number one fan. Although she would not tolerate unsportsmanlike behavior. Before moving to the Valley, they owned and operated Flings Restaurant for five years in Tantallon. They relocated to Kentville to take over Allen's Motel from Michael's parents when they retired. For 28 years Joan was in the office greeting people with her natural warmth and hospitality. Many life-long friendships were made during that time with people from all over the world. Several years ago, they closed the motel and converted it into a community of senior apartments, Allenvale Garden, the residents of which have become like family. She is survived by her husband, Michael; son, Jason (Christy), Hamilton, New Zealand; her precious granddaughters, Ashleigh, Tyleir, and Alleah Joan; sisters, Mary Margaret (Bob), Woodstock, ON; Lea, Kitchener, ON; brothers, Rick (Julie), Woodstock, ON; David (Helen), Hamilton, ON; special friend Maria Elena Castillo, Jaruco, Cuba. A special thank you to Dorothy MacDonald who helped Joan so much in her final days. Cremation has taken place and a celebration of Joanie's life will take place at a later date. Donations may be made to the SPCA or a charity of your choice. Arrangements have been entrusted to the White Family Funeral Home and Cremation Services, Kentville.

>Click here to View Condolences
Service Location
A celebration of life will be held at a later date.
Visitation
There will be no visitation, by request.
Requested Charity
SPCA or a charity of your choice