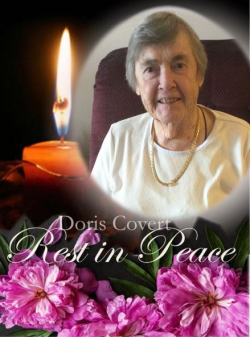 It is with great sadness that we announce the passing of our beloved sister and aunt, Doris Marilyn Covert. Doris has led a very fulfilling and rewarding life during her 89 years. She was born in Brighton, but at an early age the family moved and she was raised in Paradise, NS, the daughter of the late Jerauld and Carrie (Parker) Covert. She had a wonderful sense of humour, a keen memory, and wonderful friends all over the world. She appreciated good food, good coffee and good conversation. As a youth, Doris was active in sports, playing on both the girls softball team and hockey team at Bridgetown High School. She also enjoyed playing badminton. She attended Normal College in Truro and taught school in various places in Nova Scotia, Alberta, Quebec and at the Airforce Base in Zweibrucken, Germany. She taught for thirty-three years – her last sixteen years before retiring, she was the principal of Hebbville Elementary School. She was strict, but fair and respected by many students and parents alike. She actively participated both in community activities and in professional organizations including some NSTU provincial committees and held all executive positions of the Nova Scotia School Administration Association. At an early age, Doris was interested in travelling the world and travel she did! She knew how to pinch pennies so she would have money to support her travel plans. She visited all the provinces in Canada, 43 states in the USA and over 99 countries of the world. After her retirement, Doris decided to take cruises, mostly with the Holland American line and took over 35 cruises before her mobility became an issue and she had to stop. We loved hearing her stories of all her travels and viewing her slide shows of where she had been. Doris was an avid curler for many years and took part in bonspiels either participating herself or watching them in the stands and later enjoyed being an armchair curler watching the tournaments on her tv in her living room. She participated in International Bonspiels in Switzerland and in Southern Germany. For many summers she hosted family parties on July 1st at her cottage in Granville Center and at her home in Bridgewater. Doris was a great hostess and we all looked forward to getting together and to finding out what goodies she put in the "grab box" each year! Doris never married… she often said "I could never find a man who could keep me in the style to which I have become accustomed!" She is survived by her brother, Murray (Alta) Covert, Coldbrook; sisters-in-law, Ruby Covert, Kingston; and Charlotte Covert, Yarmouth; several nieces and nephews and their families; and special cousin, Etta Parker. She was predeceased by her parents, her sister, Jean Christison; and brothers, Doug and Bill. Doris has been cremated and there will be no visitation at her request. A private family funeral will be held at a later date. Burial will be in the Paradise Cemetery. Donations in her memory may be made to the QEII Health Foundation or a charity of your choice. Funeral arrangements have been entrusted to the White Family Funeral Home and Cremation Services, Kentville. On-line condolences and inquiries may be directed to www.whitefamilyfuneralhome.com.

To quote Doris "I’ve had some great experiences, some joys and some sorrows. I am happy that I had the courage to follow my dreams"